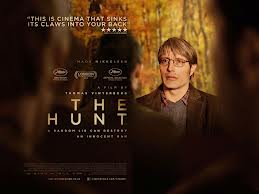 The Hunt tells the story of Lucas (Mikkelsen), a popular kindergarten assistant in a small town in Denmark. His life appears to be on the up with success in a long running battle for custody of his son and he starts a relationship with the cleaner where he works. However, when one of the pupils, Klara tells a simple little lie implying paedophilia against him things begin to spiral out of control and Lucas’ world begins to collapse.

The concept and story of this film are of course nothing new, but what separates this film as superior from the others is the depiction of the characters. Despite the fact that it is the actions of the people of the town that contribute to the dramatic collapse of Lucas’ world, all character’s actions are justified and no one is vilified. There is never any doubt about Lucas’ innocence for the audience, which makes the viewing experience frustrating but also so compelling. We of course route for him and want his innocence to be proven, but every character’s actions are justified and they are only doing what they think is the right thing to do.

With a story like this, it is impossible to avoid some clichés and sometimes the plot developments feel exaggerated a little for dramatic effect. However the premise is very scary in that this could happen to anyone and that message is dealt with in a very effective way that hits home hard. Mads Mikkelsen gives an excellent performance and every facial expression is that of exasperation as to what is happening to his world and that there is nothing he can do about it. The supporting cast are also excellent, evoking sympathy despite their actions towards Lucas, especially Thomas Bo Larsen as Lucas’ best friend but father of Klara.

The Hunt is an expertly made and acted drama that keeps you gripped until the very end. Highly recommended.

An extremely passionate and (semi) opened minded film reviewer, with a hint of snobbish.
View all posts by MoodyB →
This entry was posted in All Film Reviews, Oscars 2014, World Cinema and tagged entertainment, film. Bookmark the permalink.