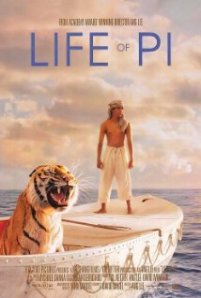 Life of Pi starts with an adult ‘Pi’ Patel (Khan) interviewed by a Canadian writer (Spall) asking him about an apparently amazing story he has to tell. Pi then tells him the story of the amazing sequence of events that happened to him as a teenager. The story begins with him living at his parent’s zoo in India, however due to financial troubles they decide to move the entire zoo by ship to Canada where he can sell the animals at a very good price. During a severe storm disaster strikes and the ship sinks and what then begins is Pi’s dramatic tale of survival marooned at sea on a lifeboat accompanied by only an orang-utan, hyena, zebra and a deadly Bengal tiger.

Though I am ashamed to say I have not read Life of Pi, I know it has always been regarded as one of the many ‘unfilmable’ novels. However with such a visionary director such as Ang Lee at the helm I was confident this would be in safe hands. Ang Lee has certainly directed films of a diverse range of genres, as well as several novel adaptations, that have been in many occasions extremely visual films. For example I personally thought that though Brokeback Mountain was an intimate story, it was an extremely visual film and some the beautiful shots in that film of the scenery added so much to the story and emphasized so many of its key themes. I have been told that Life of Pi is a novel extremely rich in imagery that works so much better as a description (hence, unfilmable), and so this novel and Ang Lee should be a match made in heaven.

In my opinion Ang Lee does not disappoint and this is very much his film. It is quite clear that every shot was made in painstaking detail with his heart and soul put into it. Life of Pi contains some of the most captivating and engrossing imagery you will ever see in a film that completely sweeps you away. Pi’s companion throughout the film, the Bengal tiger by the name of Richard Parker (explained why in the film) is yet another triumph of computer animation in film. Just like in Rise of the Planet of the Apes (Rupert Wyatt, 2011) these are characters truly brought to life. Though Richard Parker is of course a CGI tiger, there are so many almost human-like emotions contained within him that we feel a genuine attachment and affection for him.

However, though a deeply visual film Life of Pi is in no way style over substance, within these rich visuals are also some deeply emotive human themes throughout that keep the viewer gripped and involved till the poignant end. Kahn gives an understated performance as the adult Pi evoking many thoughts within us that question our beliefs and make us believe in the sometimes unbelievable. Newcomer Sharma gives a solid performance as the Pi we see throughout most of the film, being believable as someone who could survive in this situation and develop such a personal bond with an essentially wild deadly animal. The relationship between Pi and Richard Parker is the emotional centrepiece of this film which keeps us enthralled until the very end, they both become characters who we care about and the developments in their relationship is both compelling and involving.

Life of Pi becomes a very intimate and personal experience for the viewer in which we ask ourselves some poignant questions about what we believe in. The film covers many themes on belief and miracles; however it is never preachy and leaves enough ambiguity that shows respect for the viewer to make up their own minds in what they want to believe in. What is also a very impressive achievement is that Lee has created a film that has enough different elements to appeal to people of all generations. My only real criticism is that the film becomes a little too over sentimental and schmaltzy towards the end, losing a little sight of the bigger themes that play a huge part of the narrative, but this is an extremely minor problem and never hinders the emotional involvement.

Life of Pi is an unforgettable experience that successfully combines breathtakingly grand visuals as well as containing many intimate and involving themes. This is truly ambitious film making showing that Ang Lee’s Oscar was thoroughly deserved.

An extremely passionate and (semi) opened minded film reviewer, with a hint of snobbish.
View all posts by MoodyB →
This entry was posted in All Film Reviews, Blockbusters and tagged bengal tiger, entertainment, film, hollywood, oscars. Bookmark the permalink.