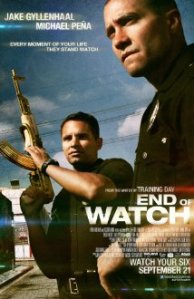 In the harsh district of South Central Los Angeles two cops, Brian (Gyllenhaal) and Mike (Peña) are partners and best friends. Their natural commitment and desire to get recognised leads them, despite the warnings of colleagues and narcotics officers, to getting lucky by making two huge drug and human trafficking busts. However, these busts along with a few close moments have made Brian and Mike marked for death by the notorious Mexican cartel.

So, the so called ‘found footage’ style has inevitably found its way into the cop movie genre. This is achieved by Brian filming everything they do, due to some contrived nonsense that he is making a film for some project involving some random qualification. We are also treated to police car on board cameras (fair enough) and thankfully the Mexican gangs like to film what they are up to as well (now you are taking the biscuit). Why David Ayer has decided to adopt this style for his latest cop film is beyond me, considering it is a style that is commonly regarded as having run its course (if it ever had one). I can only guess this was to add authenticity and to really feel what it is like to be a cop in of one of Los Angeles’ most notorious districts. To add to this there are many moments where we simply see Brian and Mike’s bromance, banter and personal revelations as they are driving around. There are also many moments where we see what they do off duty with their respective families, and get to know the ‘real’ Brian and Mike, they film it of course!

I appreciate David Ayer’s genuinely good intentions here. However, this style of camera work is simply not necessary. It basically becomes irritating and detracts from what it otherwise a very well written and enjoyable (if slightly clichéd) cop thriller. Some of the excuses and reasons for it to be ‘found footage’ borders into contrived and plain silly. There are moments when Brian is filming for his ‘project’ and talks to the camera about himself or Mike, in my view this works. This is good economical character development and provides a different and more authentic alternative to a generic voice over.

It is the dialogue and acting that set End of Watch apart from maybe other average cop films. Ayer’s other films, such as Training Day, focus on the idea of the ‘bent cop’. Here there is no question, Brian and Mike, as well as their colleagues are the good guys. The many moments when it is just the two of them and moments when we see them outside of work produce two extremely likeable characters. We care about them and side with them, it also all puts into perspective that every day they go to work they put their life on the line. When you have great dialogue and acting, then this provide enough authenticity and intensity. Surely it would have been easier to simply use hand held cameras to provide the same effect without having to think of some extremely lame reasons as to why what we are seeing would be captured on film by those involved? Indeed some of these lame reasons become slightly laughable which seriously detracts from authentic and serious tone of the narrative.

I appreciate that this is an attempt to take a different approach to a very similar story, but I am afraid to say that when the actual action and plot takes over this simply does not work. The whole plot, final action sequences and ending are all very typical of the genre but just do not work when in the whole ‘found footage’ style. Indeed there were many shots when I thought it couldn’t be filmed by anyone in the mise-en-scène. So this immediately becomes a distraction and undermines any authenticity. It is because of the excellent character development that we care about the two protagonists and this makes the final third of the film involving and emotional. However, this is a very typical ending of any film of this genre and almost feels it is there just to please the masses. This is the heart of the problem with End of Watch, a severe lack of focus as it tries to be too many things and please too many people. The overall plot is as generic as you get with this genre, and does not fit if this is supposed to be a more authentic character study. However, because we genuinely care about the characters because of all the good work that precedes the final third, the film just about gets away with it.

End of Watch is inconsistent and too much of a pick n mix of various styles to be anywhere near a masterpiece, however the great acting and dialogue produce a solid, enjoyable and emotionally involving experience. It is even better if you forget it is supposed to be ‘found footage’ style.