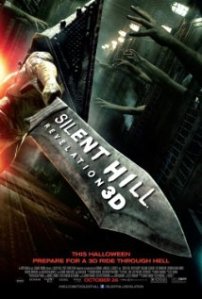 Right, well after the events of the first film, Heather (Clemens) is now a teenager constantly haunted by darkly disturbing dreams and images which she does not understand. Heather and her father Harry (Bean) are constantly on the run moving from place to place every six months to keep away from a mysterious and dangerous group of people with some stupid name that escapes me. However, when Sean Bean is captured by this group, Heather must, yes that is right, go to Silent Hill to save him as well as finding out the truth of who she really is and fight her demons, literally.

I remember playing the games when they first came out and they were ground breaking for the time. They were beautifully crafted atmospheric experiences that were genuinely haunting. However, history seems to prove that games and films just do not mix. Videogames of films just tend to be shoddy and shameless cash-ins, though Toy Story on the Sega Mega Drive was fantastic. Though games could now be easily described as cinematic, it does not mean they work as films. They are still in my opinion two completely different mediums. This has lead to most game adaptations trying too hard to recreate the excitement and atmosphere of the game and in so doing just becoming an absolute narrative mess. Max Payne, Far Cry, Alone in the Dark, Resident Evil are a few examples. I enjoyed Hitman and thought it was slick fun, but mainly because it focussed on being an action film and left behind the stealth and creativity of the games. Roger Avary had a decent go at the first Silent Hill, though it was overlong, overstuffed and overly average, and despite slightly changing the story he tried to recreate the atmosphere and subtleties that made Silent Hill a genuinely haunting and chilling experience.

Roger Avary was apparently in line to make the sequel, but then the silly sod got put in prison. So British director Michael J. Bassett was enlisted, and his CV was not too bad. Deathwatch was a decent film with an interesting idea and great atmosphere, and Solomon Kane was a little silly but good fun. However, I am sorry to say that Silent Hill: Revelation is just simply awful and fails to work on any levels. Gone is the subtle atmospheric psychological horror to make way for constant over the top as colourful as possible visuals. There was potential here as Bassett obviously has an eye for visual flair. All the various demons and creatures we see are certainly creative, and it is obvious even watching it on DVD where the 3D moments were. This is pretty much constant throughout the narrative and the fact they are permanently there and so OTT makes the experience just venture into farcical silliness. This would be fine and the whole experience would be good silly fun, but everyone involved was too focussed on the visuals they forgot to include an actual good plot. There is a half decent build up that, like I said could have been fun, but the final third is so awful and such a damp squib that you cannot help but feel that you have just wasted the last 60minutes of your life. It does appear that they thought if they throw so many visuals at it that people would forget about a half decent resolution to the plot, which is a little insulting as most film viewers are not that stupid. The half decent cast are all half decent, though Malcolm McDowell must have fallen on very hard times to do the three minutes he turns up for.

So once again the film makers have taken what made the video game such an unforgettable experience, threw that in a (metaphorical) bin and turned it into an over the top visual mess with a beyond lazy plot resolution. It almost feels that they assume we will watch a film just because of the title and they don’t have to even make an effort with the story. This is lazy and insulting film making, and a truly terrible waste of 90 minutes.