BEYOND THE HILLS (Cristian Mungiu, 2012) 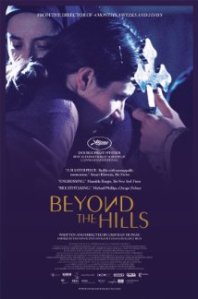 Inspired by true events that occurred in Romania in 2005, Beyond the Hills tells the story of two women, Alina (Flutur) and Voichita (Stratan). The two of them grew up together in an orphanage in a small Romanian village where they developed an extremely strong bond. However they since have gone their separate ways; disillusioned by life in the village Alina moved to Germany to become a waitress whereas Voichita moved to the convent on a hill above the orphanage living a devout religious life. Unable to bear being away from Voichita, Alina returns to the convent with the aim of taking her back to Germany. The father of the convent reluctantly lets Alina live there but what follows is a fractious relationship due to Alina’s lack of religious beliefs. Voichita is reluctant to leave and Alina’s love for Voichita compels her to stay, though extremely frustrated by what she believes are Voichita’s deluded religious beliefs. Tensions gradually increase as the other nuns and the father interpret Alina’s lack of religios beliefs as something much worse. This is both a story about sacrifices we have to make for love, how religious beliefs can go too far and the conflict both can cause on each other.

Anyone who has seen Mungiu’s previous film 4 Months, 3 Weeks and 2 Days should expect much of the same. Long takes, no music, slow build up with subtle psychology at its heart and a general theme of misery and unhappiness. Also, at 155 minutes this film does require commitment but you are amply rewarded by what is an engaging and thought provoking drama. Beyond the Hills is a perfect example of restrained film making from a director who knows exactly what he wants. We all know that Alina and Voichita’s relationship may well be more than plutonic, but it is never clearly said. I was always taught that a great screenplay shows instead of tells and Beyond the Hills is a perfect example of that.

The running time is entirely justified as every character is allowed to develop and be understood. The slow pace also allows the subtle feeling of dread and discomfort to linger threateningly in the background therefore making it so much more effective and thought provoking. What makes Beyond the Hills such an involving experience is the editing. The film is dominated by long takes in which we often follow characters for a long time or have shots with ten characters where you will find yourself trying to see every single character’s expression. This also adds a real sense of involvement as it feels almost like real time and really puts you in the action. The heartfelt and sometimes desperate intensity of the conversations between characters is enhanced by the fact they are shot by one take with the camera on both characters. This is vastly more effective and involving in this instance than a more Hollywood shot/ reverse shot style. This also requires great acting, and the performances from the two leads are exceptional. Flutur really encompasses desperate passion in her face, while Straton thoroughly deserved her best actress award at Cannes as her subtle and restrained performance is absolutely perfect.

In the film’s final third when the plot really starts to kick in, what happens is not necessarily a surprise, but still a huge shock. You have really come to care about these characters and what happens to them may not lead you to leaving this film in a good mood. It does however leave us questioning love, religion and what these both can mean and do to people and lives. The ending is also very surprising, but extremely poignant as it works on so many levels, especially the very closing sequence.

Beyond the Hills is a master class in intelligent film making, give it your patience and you will be thoroughly rewarded by an extremely involving, emotional and thought provoking story. This is of course not an easy watch and does require patience, but if you are willing to make the effort this is thoroughly recommended.

An extremely passionate and (semi) opened minded film reviewer, with a hint of snobbish.
View all posts by MoodyB →
This entry was posted in All Film Reviews, The Best of 2013, World Cinema and tagged drama, entertainment, film, film review, foreign films, movie review, world cinema. Bookmark the permalink.

4 Responses to BEYOND THE HILLS (Cristian Mungiu, 2012)