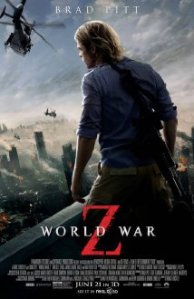 Gerry Lane (Pitt + mullet) is an ex UN investigator who quit to be able to send time solely with his family. When he and his family are travelling through Philadelphia he is suddenly  caught in crowded panic stricken streets of what appears to be infected humans attacking each other (i.e., zombies, apparently). Using his skills acquired and the convenience of still being mates with one of the UN leaders he manages to stay alive and get a chopper to the apparently last operating American battleship. Once there, as he learns that this is a global pandemic, he is asked to find answers to the cause of this pandemic, and supposedly some kind of cure. This being Hollywood, he of course refuses but is persuaded when it means his family can stay safely on board the ship. So he, a nerdy stereotypical scientist doctor type person and loads of soldiers (with no personalities as we obviously do not care about such disposable characters) travel the globe from expensive set piece to another (as well as Wales) to find the cause and some kind of cure.

A true big budget zombie movie is well overdue (Resident Evil does not count!) and this is the source of both the strengths and weaknesses of World War Z. Well, I say zombies, it is more 28 Days Later style with them running, snarling, scratching and head butting  like the usual drunks in any English high street on a Friday night (minus the kebab in their hands.) It is when we are given scenes of these humongous hordes of fast running flesh eaters that WWZ as it its most spectacular and effective.  They are running ferociously through claustrophobic streets, piling franticly on top of each other to make human mountains, overrunning coaches and helicopters like ants and these scenes all look mightily impressive and effective. That is it, the world as we know it is over. With these CGI scenes we truly believe it. The opening sequence too is very well constructed and utterly exhilarating; throwing us into the carnage and panic headfirst and singlehandedly writing off New Jersey.

However, while putting all this effort into some very effective set pieces, someone obviously forgot to give this film any substance, heart or actual genuine tension. Of course, this being a big budget blockbuster, inevitably bad things tend to wait to happen to places when our protagonist is in town. This is fine to an extent but that is not the only oh too familiar zombie apocalypse cliché that appears and as the narrative develops we do indeed tread down a way too familiar road. When the film has to actually have ideas and a little substance there is very little and as the story goes on it peters out with very much a clunky, familiar and dull finale compared to its spectacular anxiety ridden opening roar.

It indeed seems the focus of those making it is too much on the undead and forgetting to give us a reason to care about those still with a pulse. Pitt (an actor who I am most definitely a fan) gives a solid, likeable and indeed believable performance but it is not enough to make up for the lack of substance or heart. However despite Pitt and his family being the apparent emotional centrepiece, due to the fact it is so casually presented it is really hard to care. Due to his past, Pitt’s character is hardly an everyman and so this all feels like a really convenient and therefore contrived narrative function. This automatically leads to a lack of association or indeed empathy with the film’s protagonist. Considering the story is built around the protagonist this plays a major part in the downfall of any genuine involvement of the narrative of WWZ. This film is also happy to dispose of its living characters so easily too and it does not help. Mathew Fox, David Morse and James Badge Dale are all decent well known actors in their own right, but yet once they have their one scene they are simply thrown out with the undead trash.

When seeing that it had a 15 certificate I was relieved and thought that at least they haven’t focussed predominantly on getting that huge budget back by making it a 12A. However I then learnt that it is PG-13 in the states and it certainly shows. There is a severe lack of blood, and this does play a part in undermining the story considering its basic premise. I am not asking for claret to appear all over the screen, and I respect the fact that the fear is intended to be more psychological, but as soon as the family leaves New Jersey there is no real genuine sense of threat or danger in the supposedly more intentionally atmospheric scenes. The huge CGI set pieces are all well and good, but when it is characters are alone it all feels a little too clean. Even though there really should be genuine fear and tension. The final third appears to be intended to be more intimate and raw, but not only is it just pure theft from other zombie films; it is quite frankly a little boring.

The fact perhaps is that zombie films perhaps should be lower budget, murky and nasty and therefore have more unpredictability and be more compelling, involving and actually scary. Not clean, crisp and neat like a Hollywood blockbuster. Maybe if making apocalyptic films in the future, Hollywood should stick to Roland Emmerich style disaster movies!

Big, bold and very often boring; World War Z delivers on spectacle as much as it fails on substance. It is certainly worth a watch, but do not expect to actually care too much.