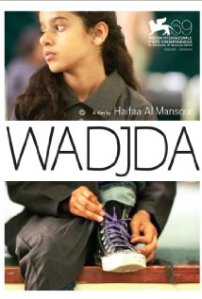 Wadjda (Mohammed) is a ten year old girl living on the outskirts Riyadh, the capital of Saudi Arabia. Finding it hard to understand her country’s restrictive culture, Wadjda is often getting in trouble at school for not conforming to the basic social conventions. After a light hearted fight with neighbour Abdullah (Al Gohani), a boy of similar age and certainly someone she should not hang out with, Wadjda sets her heart on saving up to purchase a bike she sees in a local shop so she can race Abdullah. As females are not allowed to ride bikes, her mother will not by her the bike. Determined to still buy the bike, Wadjda enters a school competition of Koran recitation (a book she has very little knowledge of, or indeed care for) of which the prized money would cover the cost of purchasing the bike.

As a westerner, I am ashamed to admit that there is very little I know about many other cultures, and Wadjda for me is one of those films that is both an education, as well as being an extremely well made, watchable and extremely enjoyable film. Saudi Arabia is a country of which I have little cultural knowledge and Wadjda provides a firsthand account some of the cultural norms of that country. It is a country without a film industry where I have been informed that films are regarded as sinful, and so Wadjda, as apparently the first ever film to be solely filmed in Saudi Arabia, is an impressive feat of film making just for existing.

Though of course serving as a very informing film for many, the tone is never preachy or patronising. I found that I was consistently learning throughout the film, but this never felt like a chore as Al-Monsour adopts a distinctively positive tone throughout the narrative, and the focus is most definitely on good old fashioned honest storytelling.

This is of course a very simple story, but it is its simplicity and the culturally specific context of the story that makes it both engaging and a revelation. In any western culture this would be a different story, but it is the little freedoms that we take for granted that represent the many challenges that Wadjda faces within the narrative.

Though I felt there was a tone reminiscent of Italian Neo realist films in terms of naturalistic dialogue and filming on location (as well as a child and a bike being the core focus of the narrative) this is an extremely well made film. The cinematography showing the intense heat and dustiness of Saudi Arabia, while the locations showing both decay in some parts mixed with the economic developments in others as Saudi Arabia enters the 21st century.

Waad Mohammed is perfect in the title role, her combination of good natured naivety and child like rebellion providing an extremely likeable protagonist. At the film’s emotional core is Wadjda’s relationship with her mother, and the scenes they share are both poignant and genuinely moving. Wadjda’s mother also has her own story that is both emotional and culturally significant. Despite the obvious traps, Al-Monsour avoids over cliché or melancholy, there is a consistent feel of optimism that makes the more sentimental moments feel genuinely poignant.

Wadjda is an impressive achievement in that it is a film that both educates and entertains. It is so well made that it avoids all potential traps of most melodramas to be one of the most involving and genuinely uplifting films of 2013.