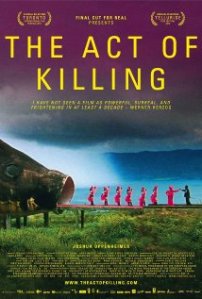 In Indonesia during 1965 – 1966 as the country moved towards a new regime, hundreds of thousands of ‘communists’ were massacred. This film offers those that were involved in the killings to re enact these killings on film, in a genre and style of their choice. Being a documentary, this is all real and we see many real and chilling conversations and anecdotes of those that happily murdered people for apparently being ‘communists’.

Many films try to get inside the mind of killers, but none in my view have examined the subject (in this case genocide) with such a genuinely disturbing and physically haunting way than The Act of Killing. Any documentary of real life atrocities such as this are of course haunting, but it is just exactly how Josh Oppenheimer goes about it that makes this sometimes unbearable, but essential viewing. Sometimes documentaries on these kinds of subjects can be preachy and a tad patronising; I think it is safe to assume that anyone watching this is aware that genocide is bad. However it is The Act of Killing’s unique approach that for me makes it so compelling, genuinely disturbing, unnerving and completely unforgettable. This is of course a consistently horrible watch, but in my view, one of the best films of the year.

It is hard to describe why this is such essential viewing, as I feel whatever I write will simply struggle to justify the raw power depicted within this film. These individuals are predominantly very proud of what they did, showing little or no remorse and genuinely believe that these murders were committed in a good cause. Apparently Oppenheimer tried to originally make this film by interviewing families of the victims, but the Indonesian authorities kept on shutting the film down. To focus on the perpetrators instead was an ingenious decision in my view, making this film even more powerful, and certainly more disturbing. We can look right into the heart of murderers as they happily tell anecdotes of their killings; it is seriously unnerving viewing, but undeniably compelling.

Of course we the outsiders may call them murderers, but they do not see it that way. They often refer to themselves as ‘gangsters’, which they believe means ‘free man’. Though of course you can always argue that the editing room allows the filmmaker to manipulate a message, but I personally felt that this film felt no need to take any moral high ground. All those involved are just shown as whom they are, and the audience is treated with enough respect to make their own interpretations of the experience. The opening shot features modern city buildings and a McDonald’s logo, showing Indonesia is in many ways a modern 21st century country, but at its dark heart are some ideologies that are yet to move on.

The fact that one of the three directors and a vast majority of the crew remain anonymous proves the risks and sacrifices that had to be made when making this film. These people have genuinely risked their own lives making this film, and that is something that should never be underestimated or forgotten.

This is film took me a few days to come to terms with, and that is only a good thing. Despite the horrifying subject matter, I intend to watch The Act of Killing again as I feel second time around it will be an even more affecting watch now that I am prepared for it.

I hope I have justified this film as much I can, but the best I thing I can do is suggest that everyone simply watches it when they can and experiences it for themselves.

The Act of Killing is a genuinely disturbing and unforgettable experience. Oppenheimer’s unique approach really allows the viewer to enter the mindset of those that have committed genocide in the past. Though it takes you too some truly disturbing and at times sickening places, this is in my view essential viewing and one of the films of the year.