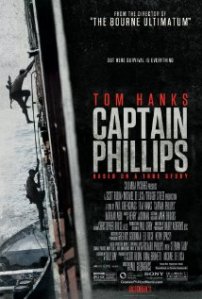 Based on true events, the US container ship Maersk Alabama is on a routine journey along the notoriously dangerous Somali coast when it is targeted by armed Somali pirates. At the helm is Captain Richard Phillips (Hanks) and as the pirates board their un-armed ship, what ensues is a tense battle of wits and cat and mouse on the isolated ocean.

‘Based on a true story’ always allows a certain amount of room for creative license, and apparently Captain Phillips certainly conforms to that. However, whether Richard Phillips was actually hero or villain is an argument for another time, it is my intention to review this film solely as a piece of dramatic narrative cinema.

With the almost docu drama feel, quick editing and intense close ups, it is pretty clear from the off that this is very much a Paul Greengrass film. It is a style that perfectly suits the narrative, producing in my view an intense and deeply engaging experience. His water tight camerawork (pun very much intended) grips the viewer with the scruff of their neck and when watching this on the big screen leaves you almost feeling claustrophobic and seasick (but in a good way if that is possible). At 134 minutes it is an exhausting experience, but overall an extremely rewarding one in my view.

At the centre of the action, Tom Hanks delivers for me an Oscar worthy performance giving emotional depth to the protagonist which was always going to be essential for Captain Phillips to be such compelling drama. What also serves as adding integrity to the drama, with the obvious exception of Hanks, is the casting of virtually unknown actors. This was one of the reasons for me why United 93 worked so well, and here in Captain Phillips the naturalistic performances of these other crew members and military personnel adds a real sense of authenticity to the narrative which complements Greengrass’ visual style.

Greengrass and screenwriter Billy Ray also add a sense of balance to the narrative with the story of Phillips arriving to work and setting sail told in parallel to the story of Muse (Abdi) and the other Somalis. Abdi himself gives an exceptional performance, and is very much an equal to Hanks giving added intensity to the dialogue that they share. There is of course no attempt to justify their actions, but it certainly enhances our understanding of their motivations and allows the film to demonstrate one of its many themes; that both these men are ultimately only serving for others and have little control over their individual destinies. As Phillips states to Muse: “Everyone has bosses.”

Indeed, it is these less than subtle themes of the effects of globalization and that all of us seem to just serve someone else that for me let the film down. Though they are potentially interesting, it almost feels that Billy Ray wants his script to serve as allegory, but is not sure how to really go about it. Maybe a few rewrites may have helped, but otherwise they just feel like ideas that do not truly go anywhere and add empty minutes to what is otherwise a compelling human drama. To go into detail may have lead to an extremely bloated running time, but they seem ill thought out and add overall twenty or so minutes that could have easily been taken out.

With a committed turn from Hanks and Greengrass’ trademark style, Captain Phillips serves as an exhaustingly intense and emotionally involving film. A slightly misguided attempt at allegory aside, this is a great drama.