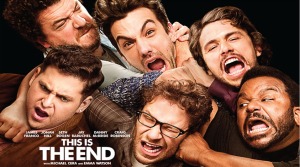 Genre: Comedy (mainly quite puerile and immature – but in a good way)

Jay Baruchel flies into Los Angeles to visit old friend and fellow Canadian Seth Rogen with the plan (or so he believes) for the two old friends to hang out. However, Seth manages to persuade Jay to go to a party at James Franco’s house, where various others actors will be attending who Jay does not particularly like. However, while the party goes on unfortunately the apocalypse is going on outside and as many of their famous friends meet grisly demises all that remains is Jay, Seth, James, Jonah Hill, Craig Robinson and Danny McBride. Queue wanking jokes, puerile humour, famous cameos and improvised banter as the six of them are forced to take refuge in James Franco’s house and somehow try to survive the apocalypse.

If ever a film came with a clear indication of whether you will like it or not it is this one. On the poster/cover you have a long list of names and six of them bundling into each other pulling silly faces. So if you like the cast and find the kind of cruder humour of Pineapple Express, Your Highness, Superbad, The Sitter, Zack and Miri Make a Porno etc. then chances are you will like this. Likewise, if you do not like this lot, crude humour immature humour and the aforementioned films, then chances are you will not like This is the End.

It is certainly a film that is very easy to criticise for how it is made. Co-written and directed by Seth Rogen, it is poorly directed and edited, and story wise it does literally feel like they made it up as they went along with a really inconsistent tone to the entire narrative. This is essentially a load of mates taking a few too many substances and deciding to make a home movie with their camera. However, in this case they happen to all be millionaire film stars so can have a $32million budget and use a big lavish house as a set, throw in some half decent CGI and get loads of their famous mates to turn up just about long enough to meet a grisly demise.

However, that said, I must confess that I found it very funny and extremely watchable from start to finish. Though the tone in terms of story is all over the place, in terms of humour it is very consistent from start to finish. Even the potentially more serious and cheesy bits are still done with an awareness and element of cheeky/stoner humour. This lot know they are doing comedy, and do not ever try to go all serious. Though there is the inevitable flirtation with smug and self indulgent, all are quite happy to take a pop at themselves and their respective careers. These are actors that do predominantly play similar characters, so why not literally play themselves?

The concept of famous people playing themselves and then mocking themselves is hardly anything new, but it definitely works in this case for me (Michael Cera and Channing Tatum the standout cameos). All are happy to take it on the chin for the typecasting they seem to get, and it does provide the source of some extremely funny interplay between them. I (and I am sure many others) find Danny McBride a little annoying and a bit much at times, it seems here he is happy to accept that is the case for the sake of comedy. It is nice when in the film what is said is exactly what we think of these actors, there is an element of satisfaction from seeing Danny McBride being told how irritating and disgusting he can be. Also, for anyone who likes seeing famous actors (and Rhianna) meet a grisly demise, there is no denying that the films big set piece near the beginning is undeniably enjoyable.

Naturally, the success of the interplay between these ‘actors’ was always going to be vital for This is the End to work, and they all obviously get on very well and understand each other, making the largely improvised comedy work well in my view. They are all clearly enjoying themselves, but occasionally seem happy to mention that they are actors and not people who change the world. This awareness and being open to self mockery plays a huge part in making This is the End so enjoyable in my view, and not irritating and infuriating (like The World’s End for example). For example, in other films Big Brother diary room style scenes would seem contrived, but here they just fit with the randomness of it all as we have James Franco saying how much he does not like Danny McBride. As I said before, there is an inconsistent tone, but the whole randomness not only keeps the viewer on their toes, but also contributes to the improvised style of humour. In a world where so many ‘comedies’ are contrived and strictly follow an more or less set narrative pattern, This is the End feels quite refreshing and almost original in comparison. There are inevitably occasional lulls in the pace as sometimes it just feels like them trying to fill the time, but rest assured there is a disgusting wanking joke not too far away.

This is a film that is certainly best enjoyed with friends and lots of alcohol around. There are some great lines and I am sure repeat viewings with friends and alcohol only enhance the experience (Oh I wish I was a student again!).

Expectedly rude and crude, but immensely enjoyable and consistently funny; This is the End will not win any prizes for its cinematic or technical accomplishments and these actors will not win any new fans, but if you want something unpretentious that is made for the sake of just being fun, then this is perfect. By far the best American comedy of the year in my view, and only beaten by Alan Partridge: Alpha Papa for the comedy of the year.