Christmas is a time of extreme cliché and even more extreme cheesiness, especially when it comes to films. Well here are three examples of recent films that are not Christmas films, but at certain points in the narrative we have scenes set at Christmas. These particular scenes in my opinion are more powerful than the usual cheesy film set at Christmas and the predictable over schmaltzy ending.

These scenes add genuine poignancy and emotional involvement to the story due to the unique atmosphere of the festive period: Christmas is of course a time of apparent happiness and spending time with loved ones and family. Well, these films are in my opinion recent examples and reminders of the darker side of this time. I feel that a certain point of these film’s narratives being set at Christmas enhances the emotional involvement and poignancy to the overall story. For everyone happy at Christmas there is someone extremely unhappy and lonely for various reasons.  There are so many of us that take for granted the simple things at Christmas and the cheesy adverts that are everywhere must surely emphasise the loneliness that some people feel and we must not forget these people.

These are of course films and involve fictional characters, but I feel they are done with an extreme integrity that depict the genuine emotions of those in more unfortunate situations than so many of us that they are all great stories, but a poignant reminder as to why we should appreciate those close to us and that in context we have lived fortunate lives.

After a simple lie from one of the young pupils at the school he works at escalates into accusations of paedophilia, the completely innocent Lucas’ (Mads Mikkelson) life has essentially been destroyed. The entire population of the small town who were once all his friends now utterly despise Lucas, and often threaten violence towards him, in some cases acting upon those threats. As the town gather in the church for Christmas, Lucas bravely walks in and sits down, despite already being severely attacked by several locals. As everyone celebrates Christmas, this only emphasises the extreme loneliness Lucas feels, as his life has been destroyed. This innocent man sits down in church, with everyone around him staring at him with extreme hatred and prejudice, he feels like the worlds most hated and lonely man and we as the audience feel indescribably tense and angry. Meanwhile the snow is falling, the Christmas lights are flashing and the choir is singing, all these apparently happy images only emphasising the injustice, loneliness and isolation that Lucas feels. Thomas Vinterberg’s film is an incredibly powerful and horrifyingly believable human drama, with an ending that will haunt you forever. 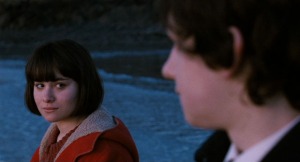 Based on the novel by Joe Dunthorne, Richard Ayoade’s directorial debut is a classy coming-of-age comedy/drama that is both funny and strikingly poignant. As our protagonist Oliver Tate (Craig Roberts) and his relationship with Jordana (Yasmin Page) develop, he is invited to dinner with her parents. Due to Jordana’s mum having an impending operation on a brain tumour they have Christmas dinner a little early (where the turkey is quite dry and the sprouts a tad mushy and out of focus). The scene itself is poignant as Jordana’s dad often breaks down into tears or shouts at the Christmas lights not working properly as he is struggling to cope with the fact this may be his last Christmas with his wife. This scene is very important in my view as it sets in motion a turn of events that contribute to our protagonist’s downfall. Being inexperienced, naive and ultimately very self centred when it comes to relationships, Oliver Tate panics and in the process eventually breaks his own heart by his inability to deal with responsibility, but also for the love of his own family. There is a certain invisible pressure that some of us feel around Christmas, and some of us do struggle to cope with it, and I feel these scenes and the ensuing narrative developments demonstrate this weakness of the human condition. 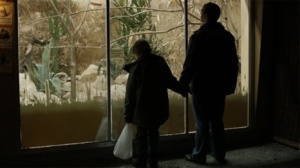 One of the darkest and most disturbing films of recent years; Michael is the matter-of-fact story of a very ordinary man (Michael Fuith) who is also a paedophile that keeps a young boy called Wolfgang (David Rauchenberger) locked in his basement. When the two ‘celebrate’ Christmas and sing Christmas carols together it is done with such a calm normality that it is almost unbearable to watch. Wolfgang has almost got to the stage that he knows no different, serving as a poignant reminder that no matter how much we may have argued with our parents, a vast majority of us did have good childhoods in context. Despite the extremely dark subject matter, Michael in no way trivialises or exploits this subject; it is dealt with an at times horrifying honesty. The festive scene is short, but adds an essential reminder as to how much so many of us took for granted as children.