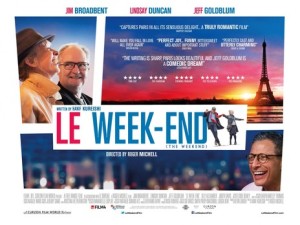 To celebrate 30 years of marriage, Nick (Broadbent) and Meg (Duncan) decide to spend a weekend in Paris, where they went on their honeymoon all those decades ago. All those years of marriage have of course contained many ups and downs and this is their chance to rejuvenate their marriage. After Meg refuses to stay in the cheap hotel Nick booked, she insists they stay in an expensive one, causing the first of many disagreements. As the weekend goes on, old memories, feelings and the odd secret (both good and bad) resurface and they also bump into an old Cambridge friend of Nick’s; Morgan (Jeff Goldblum) which only serves as an unintentional catalyst for them to both confront their marriage and their personal lives.

I feel I should add a warning to this film when it comes to all the quotes on the poster and our protagonists looking very happy; Le Week-end is not a crowd pleasing ‘uplifting comedy’. When I saw Le Week-end at a packed out cinema, I was by far the youngest person there, proving that the marketing bods had aimed at the so called ‘grey pound’ demographic. I am in no way suggesting this is a film that is too intelligent for this group in society (or indeed anyone), but I noticed that many left with bemused and sometimes disappointed looks on their face. Everyone seemed to be expecting a middle of the road but very entertaining Marigold Hotel style film and that is not the film they got. Le Week-end is an extremely well written and acted bittersweet comedy (with the emphasis on bitter) with the comedy being subtle and certainly not laugh out loud and sometimes melancholic and with dark undertones. If you are feeling depressed then in some ways Le Week-end may not necessarily cheer you up, and I think that is the expectation most people in the cinema had.

Roger Michell’s film, along with Hanif Kureishi’s subtle but painfully honest and poignant script is not made to please anyone, and is all the better for it. At the centre are two superb performances from Broadbent and Duncan as the aging couple; the two of them share great chemistry and are always engaging to watch. In the vein of Richard Linklater’s Before… films, the narrative is dialogue heavy and the dialogue itself naturalistic, raw, honest and perfectly believable.

As we follow this couple walking the streets of Paris or just sitting in their hotel room, there is often subtext within the dialogue that also feels personal to us. Our own views and life experiences become relevant and at times shape our experience of the film and tendency to side with one particular character. There is no denying that this couple of course love each other, but as is often the case whatever that type of love is now may not be enough. This is of course a film that poses questions and provides very little obvious answers, but is all the more engaging and memorable for it. Le Week-end is a deeply profound film and I am in no doubt repeat viewings will bring new revelations.

Director Michell and DOP Nathalie Durand make great use of the Paris locations to provide a great atmosphere to the film and some beautifully observed nods to classic French New Wave films. It is also not all doom and gloom as there are the odd genuinely funny and quite unexpected moments in the narrative. Jeff Goldblum is also excellent in the few scenes he gets, again his character has extreme depth as on the surface he has everything he wants but yet has many insecurities. We do start to care for these characters as they of course share the flaws and imperfections that we all have, making for an involving and rewarding viewing experience.

Though not the crowd pleasing middle-of-the-road laugh-out-loud feel-good comedy the sinister marketing bods want you to think it is, Le Week-end is a beautifully observed and deeply affecting human drama. With three great performances at the centre, this is intelligent film-making where repeat viewings reap new rewards.