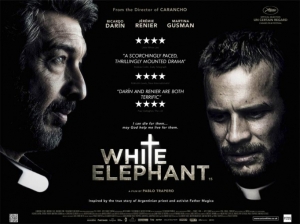 On the outskirts of Buenos Aires in a shanty town built around an abandoned hospital known as the ‘White Elephant’, Julián Mugica (Darín) is a priest of the community who is committed to helping the community as much as he can and the rebuilding programme to get the residents proper permanent homes. Suffering from ill health and finding the struggles of the gang culture and increasing violence in the community at times too much, he enlists the help of friend and fellow priest Nicolas (Renier). Nicolas himself has his own demons, having escaped persecution and almost certain death in his previous mission in the jungle and develops an instant connection with the atheist Social worker for the area, Luciana (Gusman). As tension, violence and political pressure increase in the area, the two men learn that the challenges the face may be too big.

Based on real life events, there is no denying that Trapero’s drama is an extremely well made and thought provoking film. The sheer poverty and desperation that some people are forced to live in in some countries is still a million miles away from the lives of many of us in MEDCs and the real setting of White Elephant does not shy away from telling it like it is. At the film’s core, I felt, were some extremely depressing but unfortunately realistic themes that  no matter how good intentions are and how much you try to help people, it is sometimes never enough. This is the frustrating situation these two priests find themselves in, as they are only trying to help these people, yet often find their lives in danger. Trapero’s film is not afraid to tell it exactly like it is and is all the more rewarding a viewing experience for it. Trapero’s intense use of camera work genuinely evokes the dangerous and intense atmosphere of living in these places that only a person like me can try to imagine. Some superb uninterrupted takes as the camera follows our character’s round are suffocating at times, but only enhance the intensity.

My only criticism of White Elephant is that sometimes Trapero is not sure which angle to approach his film and tries to fit too much in the lean 105 minute running time. At its heart, White Elephant is a fascinating character study. Julián and Nicolas are intriguing characters that are faced with some truly fascinating internal battles as all their good intentions and efforts seem to go completely unrewarded. Naturally they do not help these people with any selfish motivations, but their questioning of every aspect of their life provides a potentially fascinating character study and for me this film could have examined this in so much more detail. Ricardo Darín and Jérémie Renier are both excellent and the scenes when they get to reveal their inner torment and conflict are very engaging, but I just wish there were more.

I often criticise films for being too long, but this is the opposite in the case of White Elephant. There are so many powerful themes touched on, but I feel the more personal side to this powerful story is compromised to give way to the overall drama, which though still powerful, at times feels more obvious and generic.

As the narrative develops, the film is gripping and developments are frustrating and depressing in equal measure, and there is no denying that this is a film that stays with you for a while after it has finished.

White Elephant is a raw and at times brutal film of a world we often try to forget exists, with great performances at its core this is a film with undeniable power. I just wish it took its time and went that little bit deeper in terms of its fascinating protagonists.