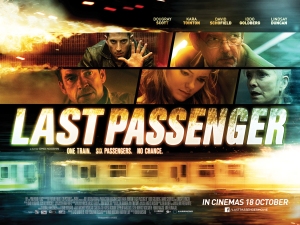 Dr. Lewis Shaler (Scott) and other passengers board the last passenger train to leave London, but after Shaler witnesses a series of suspicious events from the corner of his eye and the train does not stop at his destination it is then that they realise that something is not right. Shaler and the five remaining passengers realise that the train has been take over and the person who has taken it over is on a suicide mission to drive at full speed into the buffers at Hastings (I will get to that later). Now they must work together to try and either stop the driver or the train before it reaches its very final destination.

I appreciate that Last Passenger is pure fictional drama, but it is annoying when film makers do not take into account local knowledge, of which I have of the particular railway line that this film is set. These may be minor niggles such as the type of train they are on, the exact details of the railway line and certain stations (I cannot go into more detail due to the risk of spoilers), and may not predominantly effect the drama, but with a little homework Omid Nooshin could have changed many of them and avoided annoying pedantic locals like myself.

However, these minor details as well as the occasional plot hole aside, Last Passenger is a thoroughly enjoyable thriller. Once the character development and everyone sharing some quite awkward dialogue is out of the way at about 20 minutes in the action never really stops and there is genuine tension. Considering the low budget, Nooshin’s film is a striking achievement; it is well made with some impressive camera work and some decent action set pieces. Despite the actual train they are in not being used for at least 10 years, there are clear reasons why Nooshin chooses it (both financial and narrative), and there is no denying that with some good camera work he makes the front of it look quite sinister.

Another excellent decision from Nooshin is the permanent mystery surrounding the antagonist. The narrative solely focuses on the six remaining passengers and their struggle to stop the train. Films these days often go for cardboard card out caricatures as the bad guy with motivations for their actions being really silly, but in never revealing anything it adds much more tension and mystery to the narrative as well as making the antagonist that little bit more sinister as we never even see them. It is never explained why he has taken and wants to crash this train, as well as why he has chosen of all places, Hastings. I know it has gone downhill in recent years but it does seem a bit extreme! Naturally the passengers are a mixture of personalities but they all convey the ordinary people placed in an extraordinary situation very well. As the film enters its climax budget restraints may have played a part, and there is the occasional slight plot hole, but the action and tension build accordingly and there are thankfully no silly twists to create a very watchable little Brit thriller.