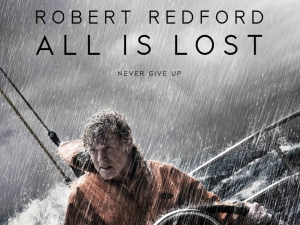 In the middle of the ocean, 1,700 nautical miles from the Sumatra Straits, ‘our man’ (Redford) awakens to discover that his boat has collided with a floating shipping container and is now taking in water. He manages to make temporary repairs to the damage but with the engine and communication equipment all down as well as the boat severely damaged, our man faces an increasing struggle against the open ocean and extreme storms with his only hope to reach a busy shipping lane and by some miracle get spotted.

I found it such a shame that J.C. Chandor’s feature debut; the Wall Street crash drama ‘Margin Call’ was seen by hardly anyone as it was an extremely well made, written and acted drama and I would implore anyone who has not seen it to give it a go. Whereas, with his personal experience, Chandor made a potentially boring and alienating subject superb drama with a genuine feel of authenticity, with All Is Lost however it sometimes feels Chandor went more for drama than authenticity. It is a film with plenty of merits but I feel it is worth saying from the offset that some of the decisions that ‘Our Man’ makes throughout the narrative are questionable, and sometimes certainly threaten to undermine the drama, tension and engagement. I am certainly no expert on sailing, and I appreciate our protagonist faces a pretty desperate situation, but some of his decisions are a little odd and perhaps Chandor should have maybe thought about that a bit before shooting his script.

Despite those little niggles that threaten to turn All is Lost into a comedy (no, I am not exaggerating) it is in my view overall an engaging and well made drama utilising its kitchen sink theme. One of the refreshing elements of All is Lost is that we have no back story or clunky and time wasting exposition of our protagonist (even a special effects bonanza like Gravity felt the need to do that). We know nothing about Redford’s character, not even his name and this for me is a good move from Chandor as we have 100 minutes that can solely focus on his sole goal of survival. We do not know if he is a good person or a bad person, we are not given the chance to judge ‘Our man’, but the goal of survival is a universal goal making us root for him, or at least feel engaged by his increasingly difficult struggle to survive.

Though maybe in my view he could have adjusted the script a little, there is no denying Chandor enhances the drama with his camera work. Despite this being the open ocean, the camera enhances the feeling of claustrophobia, helplessness and despair that any of us would feel in that situation. This may be a vastly wide open space, but Our Man is helplessly confined to a small space and we certainly feel that with him at times, especially when the extremely rough storms take hold. Chandor also often goes for underwater shots that capture the sunlight from under the sea featuring fish (and sharks) swimming serenely, once again enhancing the ocean’s beauty and tranquillity, but also its unforgiving power and ability for destruction.

To say Redford is the sole character in this film is of course wrong. The Ocean and the elements are very much the antagonists of the narrative and through the use of sound All is Lost enhances the atmosphere. Alex Ebert’s score is often over bearing and distracting, and in my view All is Lost would benefit from no non-diagetic score at all. The natural sounds of the wind and waves provide far more narrative power than any music can, and when there is silence it is at the same time a welcome relief but genuinely unnerving. This silence genuinely enhances the loneliness and despair of the situation Our Man finds himself in.

Of course a film like this requires a great performance, and as ‘Our Man’ Redford does a great job. As well as arguably being a slightly cynical move, the decision to cast a 77 year old in this role perhaps adds subtext to the narrative and of course enhances the feeling of extreme struggle. Of course, with a younger character it is possible to argue that they have their life ahead of them whereas ‘Our Man’ has essentially lived his life. However that would be adding exposition and defeat the object of the film. Redford is of course a solid screen presence but I do not personally understand the Oscar buzz. He is either physically doing something or looking desperate, and the situation is desperate anyway and so, though not by any means an easy role, I believe it is a role that any actors in their twilight years would have struggled to mess up. For me the situation naturally compliments the subtle power of the role. What is impressive in terms of Redford’s performance are the physical demands of the role, and perhaps that is why there was so much Oscar buzz surrounding his performance. However like Matthew McConaughey’s weight loss for Dallas Buyers Club, these people are paid far more for their role in one film than I am likely to earn in a lifetime as well as being advised by the most expensive dieticians and personal trainers money can buy, so the physical aspects mean nothing to me. The fact is that the insurance alone would never let Redford do anything that would anywhere near risk his health, so put into that context for me it is not that an impressive a performance, simply a solid and effective performance.

As the narrative develops things do of course get repetitive (as they would in real life), but the minimalist approach of Chandor works and despite the occasional questionable decision from our protagonist, All Is Lost manages to just about engage for all of its 100 minutes. This is an impressive feat considering the minimalist approach and there is no doubt the film’s final few scenes we’ll stay with anyone for a while afterwards.

Slightly flawed and slightly repetitive; despite the occasional ridiculous moment risking undermining everything All Is Lost is an engaging kitchen sink survival story of simply man vs. the elements.

An extremely passionate and (semi) opened minded film reviewer, with a hint of snobbish.
View all posts by MoodyB →
This entry was posted in All Film Reviews and tagged drama, entertainment, film, film review, J.C. Chandor, movie review, Robert Redford. Bookmark the permalink.