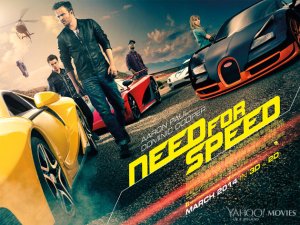 After being wrongly convicted for the manslaughter of his friend in an illegal street race, street racer Tobey Marshall (Paul) leaves prison swearing vengeance. The guilty man in question is Dino Brewster (Cooper) who Tobey reluctantly fixed up a priceless car for to save his ailing garage business, and when Dino raised the stakes in the form of a winner takes all race tragedy struck. Now with the help of Julia (Poots), the daughter of the man who bought that priceless car and is now allowing Tobey to use the priceless car (don’t ask), Tobey faces a race against time to drive from New York to California and enter the prestigious (but of course illegal) race known as the De Leon where he will exact his revenge by beating Dino in this race and winning a huge cash prize. However, not helping is the fact he has broken his parole and is wanted by the police and Dino has offered a bounty to have Tobey stopped before he can get to California, and so begins a countrywide car chase.

So here we have yet another film based on a video game (well more just using the title as a marketing ploy) that hopes to be the next big franchise and enjoy the success that the Fast & Furious franchise seems to be increasingly enjoying. Well, while the most recent efforts in the Fast & Furious franchise had plenty of mechanical problems, they were at least a fun ride, while Need For Speed is a film that sadly struggles to go through the gears.

This is a bit of an accidental shift into neutral as the premise is all there for a fun popcorn movie, and director Scott Waugh does admittedly have a great visual eye, creating some good action sequences that do capture the speed of these cars. Also, in what he is surely hoping to be his first of many big movie leading roles, for me Aaron Paul provides us with a far more likeable protagonist than George Gatin’s God awful script deserves. He certainly is as intense as always, but Paul does have great screen presence and gives the character of Tobey far more depth than the actual scrip. In fact most of the cast are likeable: they are all walking clichés that unashamedly embrace stereotypes and casual racism aplenty , but Marshall’s crew are all good fun to be around and the actors that play them (Scott Mescudi, Rami Malek and Ramon Rodriguez) all certainly have fun and that rubs off on screen. Unfortunately Cooper and Poots seem game, but cannot rise above the plethora of clichés that are attached to their characters like heavy ballast. Meanwhile Michael Keaton as the shades wearing mysterious organiser of the De Leon was obviously just paid money to go as mad as possible in his few scenes, it is a truly bizarre performance (and not in a good way).

Now, back to the script; despite the game cast doing their best (except Cooper) with the clunky and often embarrassing dialogue, not only are all the characters painfully clichéd, but the ‘plot’ is a pure example of poor and lazy screenwriting. There is not a single plot development that is genuinely exciting as everything is painfully predictable and screenwriter George Gatins seems to have no care for logic, the law or it seems the injuring of innocent people, relying on coincidences and luck way, way too much. I appreciate suspension of belief is necessary for a film like this, but the deal in exchange is that it is fun, and at 130 minutes (it feels far longer) Need For Speed is a truly laborious experience.

With the script being so unbelievably poor, it is truly impossible to be engaged or even care what happens, especially as it is pretty obvious what will happen. The existence of the Police would naturally play a huge role in the narrative, but they only turn up when it is convenient to the plot and it is annoyingly obvious. Meanwhile attempts at comedy tend to result in laughs at, as opposed to with. It is without doubt one of the worst scripts I have seen in a long time and it needed some serious re-mapping and streamlining before filming began.

Despite having the good components of a game cast and some decent action hitting the right gears, Need For Speed contains an extremely misfiring script that makes it surely one of the year’s most boring blockbusters that splutters predominantly in neutral. Now, if you will excuse me I am off to watch Smokey & The Bandit.