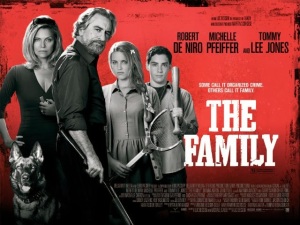 The Manzoni family, very much a New York mafia family, are forced to constantly relocate under a witness protection programme after the head of the family (De Niro) snitched on his fellow gangsters. Their latest home is in a sleepy town in Normandy, and despite being under the watchful eye of agent Robert Stansfield (Jones); they cannot avoid their old habits and particular methods of justice on unsuspecting locals. This is why they are constantly being moved, but this time their actions may just finally reveal their cover to those that want to kill them.

I know Tommy Lee Jones has made a career of playing miserable characters, but in the case of his performance in The Family I am not sure he is even acting. It is most definitely a feeling I shared with Agent Kay as The Family is a painfully boring experience. I remember a time when Luc Besson made films that were admittedly style over substance, but at least had great visual energy and were most certainly good fun, well maybe he should remember that time too!

The Family is a complete mess of a film; it is neither funny nor emotionally engaging. I do not know if Besson intended The Family as a black comedy, but it is marketed as such so therefore I feel that I am able to criticise it for not being funny, or even just fun, and it is neither. As I stated in my review in Dom Hemingway, black comedy and the balance that requires is very hard to get right, and The Family misses that mark completely. Though De Niro’s character may have ultimately done the right thing, we are never given enough to care about this family.

Of the four characters of this family, the only one of any interest is the son (John D’Leo); he is by far the most enjoyable and interesting character in the film with D’Leo being a charismatic screen presence and his manipulation of playground politics is a genuine joy to watch. He is a character I did find myself caring about, but the individual stories of the other members of the family are really boring to watch, especially the daughter’s (Dianna Agron). Unfortunately it is down to D’Leo’s character and a ridiculous plot development that those that want to kill this family find out their location. Ridiculous is fine, as this is after all Luc Besson, but it is just too much to ask to have some apparently comedic and ridiculous self aware moments and then provide us with more gritty moments that we are supposed to all of a sudden give emotional investment to. These moments feel forced and contrived, lacking any emotional engagement. The Family is one of the most stylistically inconsistent films I have seen in a long time, and suffers horrifically for it.

Each character seems to have their own subplots which are boring to watch, and when De Niro’s character is asked to attend the village’s film club and then watch and discuss the authenticity of Goodfellas it is both a depressing reminder of when Bobby did great films and really embarrassing to watch. Scorsese is executive producer and really should have stopped this! Also, despite this being an apparently remote town in Normandy, every resident including school children speaks good English!

The inevitable shootout in the film’s final 20 minutes is admittedly well put together and enjoyable to watch. However, after having to endure the previous two thirds of the film it is scant reward.

The Family is an absolute mess of a film that is poorly written and acted; it is obviously too in love with itself to consider offering anything of engagement or interest to the audience and emerges as a painfully boring and never funny or dramatic film.