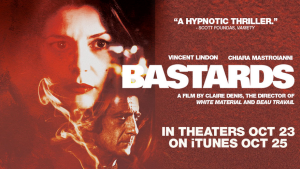 Marco (Lindon), a sailor happily living a lonely life at sea, returns to Paris after the suicide of his brother in law. The family business is on the verge of bankruptcy, his sister is desperate, and his niece has been the victim of a prostitution ring from which she now needs reconstructive surgery on her vagina as well as suffering from severe psychological issues. Seeking vengeance, Marco moves into an apartment in the same building as one of the creditors of this seedy and sinister business: Edouard Laporte (Michel Subor), who Marco believes is directly responsible for the emotional and physical damage caused to his niece. Marco however then becomes romantically involved with Laporte’s wife Raphaëlle (Mastroianni), opening up even darker revelations.

Not the most subtle of titles is it? Well, subtle is certainly never a word that comes to mind when watching Claire Denis’ moody thriller, Bastards is without doubt a suitable title for the dark themes this film explores.

Keeping exposition to a bare minimum in its lean 100 minutes, Bastards often requires the viewer to fill in the blanks and there are predominantly more questions than answers. This is a film that is hard work at times, but that in my view is rewarded by its intoxicating and dark atmosphere. Using its dark narrative to explore themes, those seeking a clear narrative with closure will feel short changed, but the film’s exploration of the darker side of humanity will haunt many (it certainly did me).

As always with films of this type, great performances are essential, and as the two key protagonists Vincent Lindon and Chiara Mastroianni give perfect performances. The script gives us little information about them, as it does about everything. However we know enough, and through their physical performances we begin to like both the characters of Marco and Raphaëlle. For such a cryptic narrative, emotional involvement in characters is necessary and through these two great but suitably understated performances we are given two characters to root for. Lindon and Mastroianni capture perfectly the vulnerability and confusion of these two good intentioned characters that are deeply flawed (like we all are), trying to make some kind of sense of this dark and sinister world.

As the narrative develops, there is just enough subtle exposition for us to become extremely involved but also unnerved by its increasingly dark revelations thanks to having two relatable protagonists. The atmosphere and tension only deepen, enhanced by Denis’ suffocating and intensely tight camerawork, Annette Dutertre’s even tighter editing and Stuart A. Staple’s deeply atmospheric score. We genuinely feel these two character’s desperation and the final revelations may frustrate some, but they certainly live long in the memory and undoubtedly feel in perfect tone with the overall nature and themes of the narrative.

My one criticism is that the script feels like it tries to be too cryptic at times, certainly risking completely alienating the audience at the expense of being too obscure and unsettling. I often criticise films for being too long, but in the case of Bastards perhaps an extra 10 minutes in total of the odd hint at exposition may have made this an even more rewarding watch.

Wonderfully atmospheric, suitably cryptic and perfectly acted; Bastards is as unpleasant as its title suggests, as well as a genuinely haunting and unsettling film, but also a rewarding one that explores the darker side of human nature that we would often rather forget.