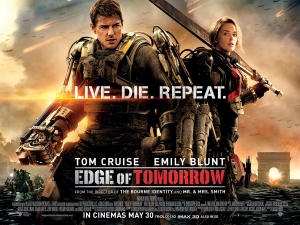 Humanity is at war with an invading alien species referred to as ‘mimics’. Lt. Col. Bill Cage (Cruise) has made sure he never goes anywhere near the frontline by being a PR strategist. However after a disagreement with a superior (Gleeson), Cage is sent straight to the frontline. Sent into battle in a battle suit he has no idea how to use, Cage eventually meets a horrible, and inevitable, demise. Then he awakens again exactly 24 hours before his death, living the same day again, surviving a little longer than the last. This continues and on the battlefield he eventually meets and saves the life of the famed soldier, Rita Vatraski (Blunt), who once also had the ability Cage has somehow acquired. Learning that humans will indeed lose the battle, using Cage’s unique ability, he and Vatraski attempt to somehow defeat the enemy and save mankind.

Many people seem to have a huge problem with Tom Cruise, I do not understand it personally as I am a huge fan, and though he may certainly not be the best or most diverse actor ever, what surely no one can deny is that he is one of best movie stars of the last few decades. Every Tom Cruise film is an event and more often than not turns in a huge profit. Of course he has been in a few stinkers, but over the last few decades has surely produced more consistent big hits than any other Hollywood A-lister. He in my view deserves this success, as though whatever you think about him as a person and his beliefs. As an actor Cruise admittedly only really plays slight variations of himself, he does this with effortless charisma and it seems to be that he is a consummate professional that takes great pride and enjoyment from what he does (and so he should the lucky git!). Well, here we have this year’s Cruise blockbuster; and it is in my view a rip-roaring romp that is pure popcorn entertainment from beginning to end, and for me the best and most enjoyable blockbuster of the year so far.

Though the premise (Groundhog Day meets Starship Troopers has been said by many), may sound like potential for a tedious and repetitive plot that may feel like playing a computer game and just getting that little bit further each time you attempt a level but always have to start at the beginning. However thanks to Cruise’s natural charisma, Doug Liman’s direction and a script that very rarely comes up for air, it is pure blistering entertainment from start to finish. Within 10 minutes Cage has annoyed his superiors and finds himself in the opening sequence of Saving Private Ryan, but with giant robot like suits, and the action does not really stop from that point until the end.

After the terrible Jumper, Liman has returned to the sci-fi action genre with the confident panache that his other previous films have entailed, and Liman is happy to poke fun at the film’s admittedly and unashamedly silly premise, with some genuinely funny moments in between all the carnage. Each new attempt at saving the world maintains an element of freshness, meaning that the quite lean (for this day and age) 113 minutes simply breezes by. Liman’s camerawork and James Herbert’s editing throw us straight into the action with Cage and the action set pieces are fantastically staged, with so much happening all around Cage, often with handheld cameras that put as at the heart of the action without feeling amateurish.

Edge of Tomorrow (based on a graphic novel called All You Need is Kill, and the decision in mid-production to change from this title which sounds like a cheap pun was a very good one in my view) of course is not perfect; the plot certainly has plenty of holes but thankfully the breakneck pace never gives us a chance to really think about them too much. It is admittedly a genre that can be a balancing act for a film-maker; how much action sequences and how much dialogue heavy exposition to include, and for Edge of Tomorrow Liman and his group of three screenwriters keep potentially confusing/boring exposition to a minimum. So admittedly little is explained, but those same people have made Edge of Tomorrow such a fun ride that we are happy to believe and go with all the unexplained nonsense.

The performances too are strong; Cruise brings his ever reliable and consistent screen charisma in a role that is initially a little different for him. He is perfectly believable as a coward and though his arc is predictable, it is forgivable. A beefed up Emily Blunt also convinces perfectly as the hard as nails super soldier Vera, even if she does have a slightly clichéd back story. The two share great on screen chemistry and manage to make what is quite a unique relationship between the protagonists believable. The first scene in which they meet on the battlefield, he is injured so she takes his ammo and leaves him to die, and with every go he gets to know her that bit better, but she has only met him for the first time. However, once again Liman and the cast manage to stop this from feeling tedious and repetitive with two suitable performances and a taut script.

Though due to the high standards set in the first two thirds, the film’s finale may feel like a slight anticlimax, it still brings enough of a satisfying closure to one of the year’s most frantically entertaining films.

Cruise proves he still has it, and Liman reminds us how he can bring his directorial flair to any genre to produce an action packed blockbuster that may have its flaws and occasional plot hole of silly science, but Edge of Tomorrow is without a doubt 113 minutes of frantic and slightly bonkers popcorn pleasure.