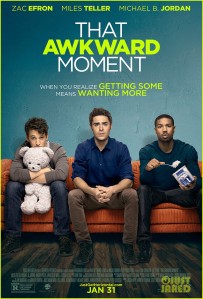 Jason (Efron), Daniel (Teller) and Mikey (Jordan) or three mid twenties best friends living in New York; Jason and Daniel enjoy their nights out and using their charm and confidence to pick up women, then when Mikey’s wife leaves him, the three make a pact to stay single for one another. Then of course comes contrived and unimaginative plot developments and anyone who has ever seen a mainstream romantic comedy can fill in the rest with incredible ease, so I cannot be bothered.

Apparently, according to the marketing blurb, what makes That Awkward Moment so ‘fresh and original’ is that it is a romantic comedy that focuses on the male point of few of the ups and downs of relationships and friendships. Well that is all well and good, but it makes little difference as That Awkward Moment is still happy to fall into all the lazy contrivances and clichés of the genre, and features predominantly very unlikeable characters that it is almost impossible to relate to. It is not funny either, the ‘humour’ often having to resort to lowest common denominator misogynistic dialogue and the ‘comic’ set pieces try to have a shock and cringe factor, but are so predictable that they are just painful to watch.

Based on the evidence of That Awkward Moment, writer/ director Tom Gormican is a lazy and complacent film maker who seems happy to frequently insult the viewer’s intelligence. This is an atrocious film with no redeeming features that is a painful viewing experience from start to end and I would implore anyone to avoid it. Gormican’s dialogue is apparently an accurate depiction of how mid twenties men talk, I of course can only speak for myself, but with the exception of Michael B. Jordan I hated every character and wanted them to end up unhappy and alone. For a film like this to work, we have to not only like the characters and relate to them, but also wish we were hanging out with them while watching the film, well due to the dialogue and lacklustre storytelling I felt the complete opposite. Oh, and surprise surprise; Money seems to be no object to these characters and they live in a very posh part of the city.

The performances too do not help; Miles Teller carries on from 21 and Over to produce another apparently charismatic quick talking character but that is actually just incredibly irritating. Zac Efron may have the looks, and I admit he is a likeable screen presence usually, but here perhaps he tries a little too hard and so overacts. Micheal B. Jordan is a likeable screen presence and his character is the only one with any decency, but that is not enough to save this film from being an awful experience. It is obviously the case that all three enjoyed making it, and they do share obvious chemistry, but that cannot elevate the horrendous dialogue and shamefully lacklustre narrative. Meanwhile all the female characters are cardboard caricatures with absolutely no depth and have personality traits that are purely at the mercy of the narrative, making them all also very difficult to like.

Those cynics out there may argue that I was never going to like That Awkward Moment, but I promise that I wanted to like it, as I thought it would be a refreshing and honest look at relationships with the focus being on the men. It however is not and surrenders to all the clichés and predictability of the genre from the off, seemingly happy to do so. Being predictable or clichéd is not necessarily a bad thing, if there is heartfelt, honest and funny writing amongst it, but That Awkward Moment is INFURIATINGLY predictable and a depressing reminder that so many mainstream comedies these days lack any originality, thought or effort.

Though it could have been potentially a refreshing comedy in a tired genre, annoyingly That Awkward Moment  proves to be just as lazy, infuriating, predictable and unfunny as all the others, just with added cheap misogyny.