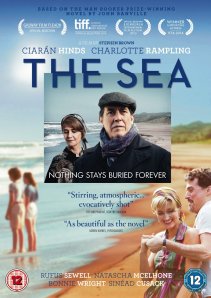 Following the death of his wife, Max (Hinds) returns to the quiet seaside town where he spent his childhood to come to terms with his loss. However, memories of a childhood tragedy resurface; the emotional experience forces him to confront both memories of his childhood and his time with his wife.

As is usually the case it seems in British dramas these days, people go to our coastline to either be miserable or deal with feeling miserable, really begging the question as to if anyone did indeed ever “like to be beside the seaside”. Not only is Ciarán Hinds grieving protagonist going to the seaside to deal with the death of his wife, but he goes to the same place where he witnessed tragedy as a child (as you do). So unfolds a three way narrative consisting of Max moping around and drinking heavily in the present, flashbacks to conversations with his wife, and further flashbacks of his childhood. Just so we are sure what scenes are what particular time in his life, the cinematography is wildly different: Miserable pale blues for the present and bright sundrenched golden yellows for his childhood.

That works quite well in a film that is admittedly well shot, but the narrative, its settings and all its characters are so drenched in pure misery that despite its very brief running time of 86 minutes, The Sea is quite an effort to watch and really does not reward the viewer’s patience or effort. It is well acted by its surprisingly big name cast, and its examinations of very relatable human emotions do evoke a little of our sympathy, but there truly is very little reward for our investment of time and emotion. There is an overbearing sense of misery as the tragic childhood story unfolds, and though it takes a slightly unexpected turn, it is a far from rewarding climax. Though in some ways that may well reflect real life in that so many of our deep soul searching questions are never truly answered, but The Sea never has the substance to justify such an unashamedly lugubrious tone.