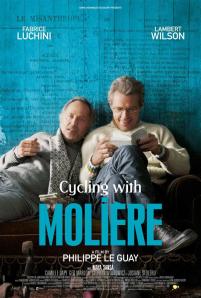 Actor Gauthier Valence (Wilson) has finally hit fame as the star of a prime time medical drama, but to prove he still has serious acting credentials decides to put on a production of Molière’s The Misanthrope in which he will play the lead character of Alceste. He travels to Île de Ré to visit his old friend and fellow actor Serge (Luchini), who hasn’t acted for five years and instead chosen a life of solitude, to ask him to star in the play. As Serge himself has become a misanthrope, Gauthier feels he would be perfect for the play, but in a supporting role as Philinte. Though Serge at first is reluctant, he agrees to rehearse with Gauthier for the week and then let him know his decision, and that they will also alternate between playing Alceste and Philinte. So the two of them spend the week rehearsing, arguing who should play which character, bickering about how each character should be played and each line said, cycling around the local area, upsetting locals and learning one or two things about themselves and each other.

As high brow and potentially complex as that synopsis may sound, there is definitely a deeply intelligent and satirical film to be made with this story and concept, but Cycling with Molière is most certainly not that film. That would also probably be a completely different film, as in Cycling with Molière the whole examination of life imitating art is done with a very light hearted approach that makes for an effortlessly watchable, if very forgettable Gallic romp. Basically a French episode of The Last of the Summer Wine with added literature.

In the lead roles Frabrice Luchini and Lambert Wilson are tremendous fun and share a great chemistry, it is there effortlessly charismatic performances which elevate what is admittedly flimsy material. Spending half the film rehearsing with each other, just to add to the slight laziness, half of the script was already written before the film was even conceived. The rehearsal scenes are great fun though and quite possibly the best scenes, as some of the scenes of the duo cycling around the picturesque local countryside does feel like filler. Meanwhile, light hearted commentary on the nature of the acting business is fun to watch, but never anymore than that.

Though there is an element of pretentious smugness to proceedings (well, it is a French film!), a lack of knowledge of Molière, or more specifically The Misanthrope does not render the film alienating. Perhaps knowledge of the play may help to appreciate the film on another level, but so much of the play is read out on screen that comparisons between the film’s protagonists and both characters they are taking it in turns to play is never less than reasonably engaging, but always pretty obvious. I do not know if it was reluctance or lack of feeling of necessity to attempt to dig a little deeper or take any risks, but as Cycling with Molière moves gently to what is a very appropriate and actually quite satisfying conclusion, its effortless charm makes it never anything less (or indeed more) than mildly amusing fun.

A charming romp that is both easy on the eye and the mind; Cycling with Molière is a very entertaining yarn from start to finish with two charismatic lead performances making up for the lack of any real substance.