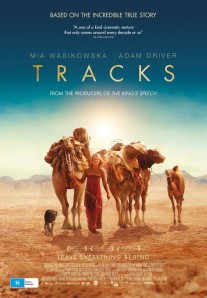 In 1977 Robyn Davidson (Wasikowska) embarks on a perilous 1,700 mile trek across remote Australian desert from Alice Springs to the Australian west coast. For her journey she works on camel farms so she can train camels of which she will use for her journey and also acquires the support of ‘National Geographic’ to fund her journey which entails eager young photographer Rick Smolan (Driver) giving her the coverage and fame she ultimately always wanted to avoid.

Or in more basic terms: Stubborn woman goes for an extremely long walk and we are supposed to care.

Apparently the retelling of Robyn Davidson’s (admittedly impressive) trek across Australia is a film that has been in the pipeline since before Mia Wasikowska was even born, but here it is and here she is playing the said protagonist. It is of course the case that most of us would not want to embark on such a trek, but in Tracks Davidson’s reasons for embarking on such a potentially suicidal stroll is never really given any solid justification; likewise we are never given a reason to care for our protagonist. There are a few flashbacks involving fathers and canines, but apart from the obvious reasons of being away from people it is impossible to truly engage by what the film’s protagonist intends to do or achieve.

I am not for one instance undermining the achievements of Robyn Davidson, but a film with a character driven narrative such as Tracks has to do more to make the viewer want to invest in its protagonist. It is quite difficult to care about or root for Robyn as her character depiction is quite two dimensional. Likewise a story of this style should create moments of ‘how the hell did they survive that?’ where the viewer is genuinely agog as to how the protagonist made it through such obstacles, but Tracks never even attempts such tension. I of course would not want the writers to make stuff up that add tension, but this is a film whose story never really grips.

John Curran admittedly shoots the film very well, and in widescreen the shots of the vast Australian outback do look beautiful. However I would take issue with some reviews that have praised Tracks for apparently capturing the remoteness and beauty of the Australian outback and deserts, at the end of the day any shot of the desert will capture its beauty and desolation, because it is a desert! The fact it is an actual desert means that filming a scene of it will capture its natural desolation, it doesn’t mean it is well shot! Also continued shots of the Australian outback do often feel repetitive as the film seems to feel a continued duty to remind us that the Australian outback is sparsely populated, which can feel a little patronising at times. However Garth Stevenson’s wonderfully ambient score adds a lot of much needed atmosphere to the film.

Despite being the protagonist that apparently drives the narrative, Davidson’s character arc is also very flat; she is hard to like and understand at the start and never really changes. Thankfully in what along with Stoker is in my view her best performance so far, Wasikowska is a superb screen presence, even if the script does not do her character any favours. Her dedicated performance sometimes elevates our emotional involvement in what is quite frankly a very poorly written protagonist. Likewise Adam Driver emerges as genuinely sympathetic as the National Geographic photographer that follows Robyn around and his understated performance is the main reason for that, as well as the fact he often helps out the deeply ungrateful Robyn.

Though it may be a powerful and impressive true story, due to producing an uninvolving and often unsympathetic protagonist Tracks is an always watchable drama, but never the truly gripping or rewarding story that it seems to think it is or want to be.