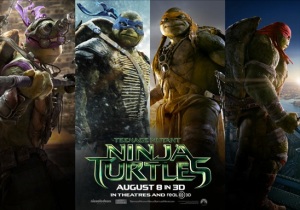 New York is a city in turmoil as a criminal group known as ‘The Foot Clan’, led by a mysterious figure known as Shredder are waging a war of fear. The police are unable to do anything about it, but channel 6 journalist April O’Neil (Fox) is determined to uncover the truth behind who The Foot Clan really are and in doing so comes to face to face with the vigilantes who may just be the city’s only hope; four 6 ft mutant turtles that are ninjas and also teenagers!

With Hollywood constantly churning out CGI remakes, it was inevitable that everyone’s favourite heroes in a half-shell would get another big screen adaptation, and the fact that it is produced by Michael Bay is always an ominous sign. Well, though Michael Bay is executive producer he may as well be the director as it has all his unpleasant trademarks all over it; shameless product placement, perverted shots of Megan Fox’s backside, cheap immature humour and migraine inducing CGI-heavy action sequences. So, basically it is not very good.

I grew up with the cartoon of Teenage Mutant Hero Turtles and loved it and so am perfectly aware of the ridiculous concept from the start and am more than happy to forgive that. However the trio of screenwriters have gone for the Dickens approach by making everyone related or connected to each other (like in The Amazing Spider-Man films) and have put April O’Neil at the centre of everything, but this just comes across as lazy, contrived and well, stupid with plenty of flaws and plot holes along the away.

All this contrived story nonsense would of course be forgivable if TMNT was an enjoyable romp, and though it is watchable enough, it should have been far better. Though the trademark catch phrases that we all know occasionally pop up, the film goes for lazy jokes that are not funny. The dialogue is as flat as a pancake with jokes ranging from really immature to really crude, which also brings up the problem of who the film is aiming for. It is a children’s programme, but yet the film is a 12A and quite violent and features some crude humour. Then saying that, sitting across from me at the cinema there was a woman with two young children who loved the violence and found a really crude joke hilarious, so what the hell do I know?!?

The main problem is that the story is rubbish, and the two bad guys are extremely one dimensional; one is a great adversary of the turtles but the narrative completely undermines that fact and the other is quite possibly the worst ‘twist’ ever thanks mainly to the casting. I of course will avoid spoilers but it seems that once again Hollywood treats the audience like idiots and doesn’t think that the casting decision alone will make certain revelations less than surprising.

Many have criticised the motion capture of the turtles, but I thought was fine and I really wanted to like them, and the voice cast of relative unknowns do a fine job. However the late decision of getting Johnny Knoxville to do the voice of Leonardo is a strange decision, particularly as his character has the least development out of all of them. The main focus of the film is however April O’Neil, and the fact she is played by a predictably awful Megan Fox and the film even more predictably likes to focus on her backside only makes the film more difficult to watch. She is rubbish, completely lacking in any kind of screen presence and just pouts her way through scenes (well, the ones where we actually see her face). Of course not too long ago she vowed never to work with Michael Bay again (and apparently compared him to Hitler), but now they have made up. Well, pardon my cynicism, but a large sum of money and the fact Fox is not exactly appearing in many films these days may be factors in her being happy to work with Michael Bay again.

The action set pieces themselves are not exactly great and just textbook Michal Bay with all logic and laws of physics ignored and it is almost impossible to keep up with who is hitting who, especially a migraine inducing sequence of all of them rolling down a steep snowy hill. Likewise the film’s climax is not only slightly overlong, but a bit of an anti climax, not helped by the fact the plot itself and the film’s villains are quite lame.

TMNJ is admittedly always just about watchable, but it could have been so much better. Brotherhood and loyalty are universal themes that, if written well, could make a film engaging even if the main characters are CGI mutant turtles. The film does sometimes try to examine these themes, but these half-hearted attempts are usually interrupted with messy action set pieces or cheap jokes. If screenwriting trio Josh Applebaum, André Nemec and Evan Daugherty had perhaps tried a little harder, then this film could have had far more emotional engagement and capitalised on the huge popularity of these characters. This has to ultimately make TMNJ a disappointment, and I feel extremely comfortable blaming that on Michael Bay.

Another popular cartoon that could and should have been a great popcorn movie; unfortunately Teenage Mutant Ninja Turtles is yet another lazy blockbuster from the evil Michael Bay machine where the makers think throwing CGI at the screen and giving the audience a migraine is enough to make up for the fact they haven’t worried about story, characters or screenplay.