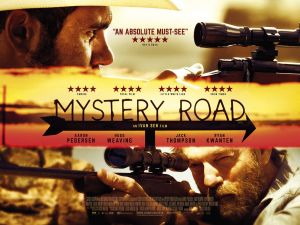 In the desolate Australian outback Jay Swan (Pederson), a detective of indigenous descent, returns to his home town to solve the case of a teenage indigenous girl whose dead murdered body is found underneath a highway which is a frequently used trucking route. As he makes his investigation, Swan receives no assistance from the predominantly white police force and is met with hostility by both the local white population and the indigenous local population, who see him as a traitor. As Swan carries on with the investigation, he uncovers even darker secrets about the local area and it population.

Though in isolation that narrative my not seem like the most original, writer/ director Sen utilises what may seem in isolation to be a very basic narrative and utilise it to explore with deep intelligence some cultural themes that are deeply specific to its setting. With a running time of just over two hours, Mystery Road certainly develops at a slow pace, but is all the better for it as the atmosphere of genuine tension gradually builds until the film’s suitable conclusion.

With the protagonist being a police officer of indigenous descent, the film examines with deep intelligence specific culturally issues that I will happily admit to having very little knowledge of. There is a deep brooding atmosphere to the whole film that is only enhanced by the deep subtext of the minimal dialogue shared between characters. Our protagonist truly is on his own, with very few people he can trust from either his own ethnic background, or colleagues in the white dominated police force.

As Swan takes increasing risks to investigate further, the narrative of Mystery Road reveals further subplots involving fellow police officers, local drug dealers and even Swan’s own family. Sen shows his skill as a very assured filmmaker by making sure the most subtle subtext increases the levels of tension and uncertainty for both the protagonist and us the viewer.

As Swan, Aaron Pederson is exceptional; commanding the screen with a performance of physicality, his facial expressions capturing perfectly the frustration and isolation he experiences in both his personal and professional life. Excellent support so also provided by the always excellent Hugo Weaving and Jack Thompson.

Mystery Road is also a stunningly shot film; the widescreen shots of the unforgiving and barren Australian outback or the desolate towns in the area are captured perfectly with Sen’s suitably static camera as he holds shots for a long time (Sen also edited the film), but then uses extreme close ups to show the deeply troubled expressions of the film’s characters as they all contain troubled back stories and deep internal pain and conflict. This is only enhanced by the cinematography by Ivan Sen himself; using pale colours to only enhance the bleak feeling of the narrative. The sound design of the film too is exceptional, with non-diagetic music barely used (Sen also composes the non-diagetic score); instead the almost unbearable silence of film’s bleak and isolated setting almost being another character in the narrative. Ivan Sen is without doubt a very talented filmmaker and hopefully Hollywood will come calling very soon. That place could certainly do with a filmmaker like him!

As the narrative and its subplots develop, the deep tension and mystery only increase, but it is all brought to a very satisfying and suitable conclusion in the film’s finale. The finale may seem a little generic to some, but for me it was appropriate ending that was consistent with the tone of the film and a very satisfying conclusion to bring to a close many of the film’s subplots. Mystery Road is part crime thriller, part a story of personal redemption, part cultural allegory, and Ivan Sen merges them together with incredible skill to produce one of 2014’s best films.

An intelligent, absorbing and superbly made thriller; with its outstanding performances and the way it utilises its unique setting to examine cultural themes, Mystery Road grips tightly from start to finish.