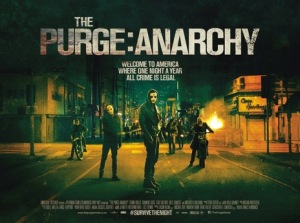 It is the year 2023 and America is a society with record lows in poverty and crime, largely accredited to an annual twelve hour event called ‘The Purge’, when all crime is legal. On this evening a man named Sergeant (Grillo) decides to take advantage of this annual event to get revenge on the man who killed his son in drink driving incident. However, a chance meeting with a young couple who have been stranded after their car has broken down and a mother and daughter who have been forced from their home forces all five to endure a night of survival.

I remember The Purge being one of my big disappointments of 2014, as it was a potentially interesting concept that was turned into a painfully generic and dull home invasion film. It did however make a lot of money, and so yet another franchise was born. Having been given a second bite at the cherry, James DeMonaco does not exactly produce a classic, and although Anarchy is just another genre piece (this time a survival thriller/ action b movie) it is at least reasonably entertaining. Though when watching Anarchy it is hard not to wish that John Carpenter thought of this concept at the peak of his powers. Now, that would have been good!

With the action now taking place on the streets during the turbulent twelve hours it allows for Anarchy to at least have more characters, be atmospheric, moderately tense and certainly quite watchable, even if DeMonaco’s script is still pretty weak. The narrative is extremely contrived and whenever the characters are not avoiding people ‘purging’ and forced to share a bit of chinwag with each other the dialogue is pretty awful. The acting is adequate enough and as the leading character Frank Grillo looks the part, but the characters are all walking clichés and it is hard to truly care about any of them.

It still seems that DeMonaco thinks that his screenplays are far more intelligent and have far more substance than they actually do; just like its predecessor The Purge: Anarchy could well be full of intelligent social commentary and allegory, but instead it just keeps on occasionally making the one political point that had already been well and truly established in The Purge. This is something that just gets increasingly boring and extremely patronising. The Purge exists to make sure the wealthy stay wealthy and the poor keep on dying out, WE GET IT! Ultimately, in terms of narrative there is nothing to separate Anarchy from any films set in future dystopias where civilization, law and order have failed that tend to star failed action stars (this could easily be a Steven Segal film). This is a shame as there is potential for it to be far more than that.

There are some potentially interesting ideas in there somewhere, even if it does feel like DeMonaco is making the film up as he goes along, such as how some of the middle classes choose to ‘purge’ and the rise of an anti-purge organisation. Though I doubt these ideas will be developed much in the inevitable third film. In the hands of a better filmmaker this is a franchise with so much potential, but while they continue to make a lot of money in DeMonaco’s hands (and Anarchy made A LOT of money) I do not see that potential ever being realised.

By having a bigger and better narrative setting than its predecessor The Purge: Anarchy just about ticks all the right boxes as a vacuous generic survival thriller/ b-movie and is at least just about entertaining compared to the horrifically bad first film. Still a serious case of unrealised potential though.