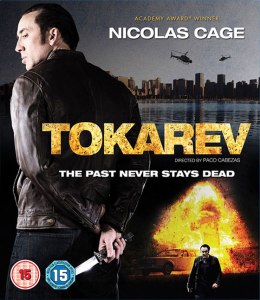 After retiring from the mob, Paul Maguire (Cage) now runs a legitimate business and is a doting husband and father. However after his daughter is kidnapped, Paul is forced to team up with his former crew to dispatch his own brand of justice despite being under the close eye of a local detective (Glover).

Considering just how many years he has been churning out utter rubbish, to describe his excellent performance in the equally excellent Joe as a return to form doesn’t seem appropriate as Nic hasn’t had any ‘form’ to return to for such a long time. Well, Tokarev (or Rage as it has been called elsewhere) is your standard straight to DVD Nic Cage nonsense featuring a text book performance from its Oscar winning (as any poster with his name on it constantly reminds us) leading man.

While Nic Cage’s performance does raise the occasional moment of laughter (sometimes it seems that even he must be in on the joke by now!) the writers and director seem far more stoic as Tokarev takes itself very seriously. To describe this as another rip-off of Taken would be to suggest that Taken was actually original itself (but at least it was good fun), but Tokarev is certainly going for that vein and with an estimated budget of $21million should be able to deliver decent action. However director Paco Cabezas does not deliver particularly good action at all.

In terms of its basic narrative framework, Tokarev is ultimately no different from any action film, and what is probably frustrating is that there is potential here for a decent thriller. Sometimes filmmakers know they are making silly nonsense, but just do not care, and admittedly this can make for entertaining films (sometimes), but the deluded serious tone of Tokarev makes it hard to enjoy, despite unintentionally funny performances from the likes of Cage, Glover and Peter Stormare.

If the narrative’s few twists and turns involving what happens to Maguire’s daughter and also the gun that is the title of the film were dealt with by a much sharper and tighter script than Jim Agnew and Sean Keller’s (and perhaps not starring Nic Cage and the baggage of mockery that comes with him) then this could have been an intriguing and quite gripping story. There is also the potential for the narrative to explore some interesting themes such as paranoia and fading masculinity. However it doesn’t, and though it is admittedly always watchable, Tokarev is also quite dull from start to finish. Even the ending, which is delivered with complete po-faced stoicism, does not deliver the sucker punch that it either should or the makers appear to think it actually does, due to everything else about the film being poor. What a waste, well at least I am sure Nic got a decent paycheque to keep money on the metre and remind us that Joe was sadly, just a one-off. Still, at least Nic Cage didn’t then do a film after this called Left Behind which was even worse (!).

A potentially decent thriller wasted by everything else except the premise being utter rubbish which is only enhanced by all involved thinking they are making something serious and good, well except Cage; he can’t be bothered to make any effort. Well, no one should be bothered to make the effort to watch Tokarev either.