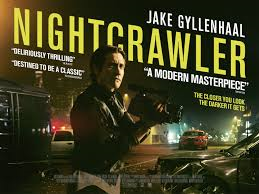 Lou Bloom (Gyllenhaal) lives a life driving around Los Angeles and stealing to make money, when he however discovers a new way of making money; using a police scanner and camcorder to film the immediate aftermath of shocking accidents and crimes and then selling them to local news channels. Lou hires an assistant called Rik (Riz Ahmed) and continues to demand a higher price from the news director of a local news channel (Russo). However Lou’s ambition drives him to get more and more graphic footage, leading to shocking consequences for all involved.

Though it is often down to factors outside my control (mainly me being skint at time of release), there are films I often want to kick myself for missing at the cinema, and Nightcrawler was certainly one of them. Intelligent thrillers are increasingly hard to come by these days, but Dan Gilroy’s directorial debut manages to be intelligent, satirical and thrilling all at the same time.

To say that the media will stop at nothing and cross the boundaries of what is considered ethical just to get the best story is not exactly a surprising revelation as we all know all cynical it is as a medium; Newspapers do it to sell their papers and TV news channels do it to get the most viewers, and they of course will exaggerate and be creative and economical with the truth if it is in their interest to do so. However Gilroy’s film does not insultingly preach this to the viewer, it merely uses it as a narrative tool to explore darker themes on human nature.

That is where our protagonist comes in; Lou Bloom has to be up there as one of recent cinema’s most intriguing and memorable sociopaths. His natural charisma, ruthless determination and uniquely logical explanations and perception of things make for captivating and often darkly comic viewing. For Nightcrawler to work as well it does of course requires an exquisite leading performance, and as Bloom an extremely slender Jake Gyllenhaal delivers what is a so far career best performance and oozes deep intensity and charisma in equal measure. It is in my view a complete travesty that Gyllenhaal did not get an Oscar nomination, his intense delivery of Bloom’s speeches are as compelling as they are chilling, darkly funny and unnerving.

As Bloom tries to get increasingly more shocking footage it is his ambition that drives the narrative and takes it to some very dark turns. It would have been so easy for Gilroy to resort to lazy and contrived cliché for the film’s final third, but yet Gilroy takes what is a solely protagonist driven narrative to even darker places as Bloom’s single minded and uncompromising determination to achieve his goals and intentions are the single cause of the developments. He has the help of Riz Ahmed’s long-suffering assistant and Rene Russo’s ruthless news channel director (both excellent in their key roles), but how Lou deals with these people and each situation leads to even more shocking consequences as his true character really starts to show. It makes for a compelling, satisfying and appropriate climax to an already engaging thriller.

Not only is Nightcrawler superbly acted and written, it is also a superb film from a technical point of view; Los Angeles is very much a character in the narrative and its skyline at night only adds to the sinister and unsettling atmosphere of the film. It is all beautifully captured by Gilroy’s superb camerawork and Robert Elswit’s cinematography, in particular scenes of Lou talking to Rik in his car in which the camera wonderfully captures reflections in Lou’s bright eyes only serving to enhance the infectious charisma this unique protagonist has and the deeply unique ideologies he has contained inside his warped mind.

As far as character studies go, there are very few recent examples as deeply unsettling but utterly engaging as Nightcrawler.

A skilfully written and deeply compelling character study; Nightcrawler is not only a satire on modern culture and aspect of the human condition, but in what is only enhanced by an exceptional leading performance from Jake Gyllenhaal, features one of the most memorable cinematic sociopaths of recent times.