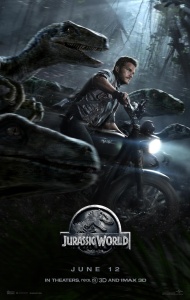 As originally envisaged by John Hammond, Isla Nubla is now a fully functioning dinosaur theme park. However, to keep visitor numbers up, a new genetically modified species of dinosaur is unveiled, which backfires with devastating results, putting in danger every other person and dinosaur on the island.

These days it seems pretty much all blockbusters feel the need to stick to tried and tested narrative conventions and avoid taking any risks so they make a profit. Well, though Jurassic World was always destined to be a box office hit, it is certainly a film that plays it safe in terms of its story and keeps with the tropes of previous instalments. This is done almost so much that it often feels like a remake of the 1993 original, except for a few minor changes here and there, such as the almost Deep Blue Sea (shudder) concept that essentially drives the highly unoriginal plot and its narrative devices.

So we of course have the usual menagerie of caricatures and plot contrivances; the dashing and charismatic hero who is compassionate towards the dinosaurs and a bit of an anti-establishment maverick (Chris Pratt), the two children who are going to inevitably find themselves in the middle of the carnage (Nick Robinson and Ty Simpkins), the borderline irritating ‘comic relief’ character (Jake Johnson), the nasty character who has intentions to use the dinosaurs for selfish and less than ethical reasons (Vincent D’Onofrio), the hubristic and nasty genius scientist (BD Wong – a real unexplained u-turn of character from his role in the first film) and of course the character with the big character arc; an ambitious corporate type (Bryce Dallas Howard) who is a relative of the two aforementioned children but puts her ambition before family – oh, and she has a romantic history with the hero, will they find that romantic spark again? Will she learn the importance of family? Hmmm……

In the first twenty minutes we are bombarded with an abundance of exposition dialogue as we are told some minor details of what has happened to the famous park in the last 22 years (films 2 and 3 basically didn’t happen, which considering how average they were, it isn’t a bad idea) and who is who, and from that exactly what is going to happen to them. The dialogue does often clunk both here and throughout the film, and there are of course the usual slight flaws and plot holes; such as fences and windows being either indestructible or easy to brake depending on what the plot demands, as well as no real attempt to explain exactly how they reconstructed the park.

There are certainly many criticisms that can be thrown the way of Jurassic World in terms of its story, characterisation and dialogue. However, this is of course a franchise that is first and foremost all about visual spectacle and action, and Jurassic World does certainly deliver on this, but crucially director Colin Trevorrow generally avoids getting carried away with the CGI, and though the characters are all straight out of the beginners guide of film clichés, the ones we are supposed to care about are actually (and crucially) worth caring about.

The film does go by at a relentless pace after the first twenty minutes or so and delivers genuine tension and awe-inspiring set pieces. The set pieces are particularly well made as instead of throwing CGI at the screen, there is instead more of a focus on the human’s caught in the middle with tight close up shots, proving to be very effective. There is also some pretty brutal deaths that push the 12a rating to its very limits, even if they are often just sounds of crushed flesh and bones.

Of course one of the problems the film would face is how to follow up John William’s unforgettable score; well J.J Abrams’ composer of choice Michael Giacchino produces a score that is essentially a combination of William’s famous riffs and his own scores to the two Star Trek films, but it does work to produce a very effective score. There are also some nods to the franchise’s heritage which are a genuinely nice touch and the films also contains what is my view the franchises most genuinely emotional scene (not spoiling it though).

Some of the performances are also strong, with most actors elevating their characters above their clichéd traits and arcs. Chris Pratt is now deservedly a Hollywood A-lister and though his performance does at times feel like an interview for playing the new Indiana Jones, he delivers a predictably charismatic performance making his character extremely likeable despite having to say a bulk of the clunky lines and the supposedly emotional side of his relationship with the Velociraptors emphasised a little too much towards the end. Bryce Dallas Howard is also excellent and the two children manage to not be irritating. Unfortunately despite the undoubted talent of Vincent D’Onofrio, he cannot elevate his character above cardboard cut-out villain, but it often seems he is happy just to pick up his payment anyway.

Despite a fair share of problems, its obvious intention to never even try anything too radical almost helps to make sure that Jurassic World is a welcome addition to the franchise and certainly an improvement on the two previous sequels. It consistently delivers thrills and spectacle all the way through, and though its finale certainly takes a fair few liberties, it sets a reasonably high bar for this year’s summer blockbusters.

Though it may contain both flaws and lazy contrivances in equal measure, as well as being extremely similar to its 1993 original in terms of plot, Jurassic World is a genuinely thrilling and spectacular experience that entertains in all the ways a blockbuster should.