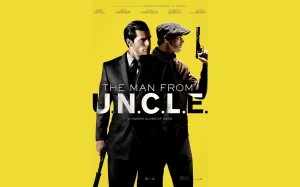 At the height of the cold war, a mysterious criminal organisation plans to use nuclear weapons to upset the already extremely delicate balance of power between the USA and the Soviet Union. To take on the top secret mission to stop this, CIA agent Napoleon Solo (Cavill) and KGB agent Illya Kuryakin (Hammer) are forced to team up, despite their obvious differences.

Guy Ritchie can most certainly never be described as the most subtle of filmmakers, but his approach has on the whole served him well to produce some very enjoyable, if rather vacuous films. His cockney gangster films (of which there has been countless inferior imitations that admittedly almost cloud memories of his good Ritchie’s films were) and of course the two Robert Downey Jr. starring Sherlock Holmes films, (which of course the purists predictably hate), have all been tremendous fun. Of course the less said about the abomination of filmmaking that was Revolver the better!

So when it was revealed that Guy Ritchie would be at the helm of a film version of TV series The Man from U.N.C.L.E. it was of course obvious from the get-go that it would ultimately share very little with the TV series except the marketable title, a few characters and a few minor plot points. Even more obvious was the certaintanty that it would not be the most profound or memorable of films, with an inevitably much bigger emphasis on style than substance. However what I thought would be the guarantee is that Ritchie is a safe pair of hands when it comes to producing enjoyable over-the-top action romps.

Maybe I had too high expectations, but it is hard for me not to regard The Man From U.N.C.L.E. as an overall disappointment and waste of potential. There is without doubt huge potential here, as all the variables are there for an enjoyable action romp (the material, the director, the cast), but when it feels that this film is about to get going, Ritchie seems to constantly miss a trick as it frustratingly stutters along in a consistent middle gear. The plot was inevitably going to be minuscule with plenty of holes, but the constantly anti-climactic action sequences only emphasise this, making for an often frustrating viewing experience that really does feel disjointed.

Aesthetically the film pays tribute to a past era and does so very effectively with Daniel Pemberton’s Mancini-esque score and John Mathieson’s luscious cinematography being spot-on. In keeping with this, Ritchie also opts for split screen moments in some action sequences, this seeming homage to a certain era does work when our two heroes are trying to break into a top secret facility as it feels genuinely click. However Ritchie then uses it for the climactic action sequence, and it feels frustratingly lazy as it means what could have been a really enjoyable and tense action sequence is over in the blink of an eye, not only taking away some of the enjoyment, but also any genuine tension or intrigue. Likewise the plot itself is supposed to have plenty of ‘twists’, but these can be predicted way before they happen, making their smugly delivered revelations more than a little yawn-worthy.

The film is certainly elevated by cast, with the two protagonists creating one of the year’s most memorable bromances. From his body language to his accent, Henry Cavill oozes charisma in his note-perfect performance. In what has been commonly regarded as somewhat of a Bond audition, Cavill manages with skilful aplomb the perfect balance of comic timing but also being completely believable as a cold and calculated killer when required. Armie Hammer has proved in minor roles that he is a good actor, and for me his performances in the financial disaster that was The Lone Ranger was half-decent. Time will tell if he has another flop on his hands, but his performance is also the right combination of convincing cold-blooded killer and comic timing, and the accent is just about okay. Cavill and Hammer share great on-screen chemistry, and though there are some very funny moments, the script never truly utilises the two great performances in yet another missed opportunity.

The supporting cast are all good in their respective roles, but never truly get a chance to shine with Cavill and Hammer being the key focus, and Elizabeth Debicki is great as the film’s villain, but has pretty much no background story. Despite her character being somewhat crucial to the ‘plot’, Alicia Vikander feels slightly wasted in her role, and her potential romance with Illya feels forced and completely unnecessary, with an early scene between them involving wrestling being particularly cringe-worthy.

Meanwhile Hugh Grant seems to be most certainly enjoying himself, but when he turns up is acting half asleep. He was probably told by Ritchie to just “be Hugh Grant”, which he certainly does very well and is enjoyable to watch, but I expect he enjoyed his pay cheque for the role more than anyone does watching his ‘acting’ performance. His performance pretty much sums up the film and the frustrating lack of effort all-round. Would Guy Ritchie’s former producer Mathew Vaughn have done a better job? I think so.

A frustrating case of wasted potential; On paper The Man From U.N.C.L.E has all the variables to be one of the year’s most enjoyable action romps, but despite two superb lead performances the lacklustre plot, slapdash pacing and rushed action sequences make it a film of constant anti-climax.