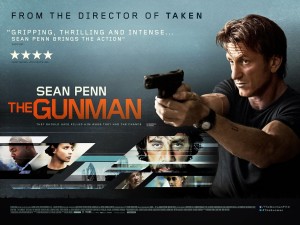 Eight years after leaving the Congo when he successfully completed a job to assassinate a high ranking Government official, former mercenary assassin Jim Terrier (Penn) now volunteers as a well digger to atone for his former sins while also suffering from PTSD. After an attempt on his life, he is forced to come out of retirement and flee to London to reconnect with those also involved in the shooting eight years ago and get right to the bottom of why he is now the one being hunted.

It seems to be the done thing these days that aging actors take on the lead role in mindless action films, but I am admittedly a little surprised that Sean Penn would be a name to add to that ever expanding list. Well, as he is constantly happy to remind us throughout The Gunman, Penn spent plenty of time at the gym getting beefed up for the role. In fact, it does feel when watching this seen-it-all-before drivel that part of his agreement for starring in this film was that the camera had to frequently focus on his abs!

It of course goes without saying that in terms of plot The Gunman adds nothing new to an already saturated genre and the only thing that stopped it going straight to DVD was having an Oscar winning star in the lead role. I always state that an unoriginal plot is not in isolation a problem of a film of this genre, as they are there to simply entertain the audience and ultimately allow them to switch their brains off. Unfortunately The Gunman fails to achieve this as not only does it take itself way too seriously, but never gives us a reason to route or care for its protagonist. It most certainly never entertains, just bores!

The film’s protagonist is a mercenary that happily kills a Congolese Government official (this is never morally justified, but simply depicted as the famous cliché of ‘just a job’), but eight years later he has atoned for his sins by digging a few wells. Now that people want to kill him he is a figure of morality and righteousness that we must route for as he attempts to bring to justice those that are, truth to be told, just as bad as him. The writers have however thought of that and so made sure that he has an ailment that is of course at the utmost convenience of the narrative; in this case it is Post Traumatic Stress Disorder. As he suffers from this he is therefore worth routing for no matter what his crimes of the past! For God’s sake!

So, not a good start there, and the generic and episodic plot throws action set piece after action set piece. Admittedly the fact our protagonist suffers from PTSD adds a little more edge to the action scenes than for example, ones that feature a seemingly bulletproof Neeson, but despite the constant close-ups of Penn’s abs reminding us that he should beat all the film’s henchman at an arm wrestling contest, they are often dull and overlong, and not to mention repetitive.

Penn himself looks bored, while the rest of the cast in their extreme genre cliché checklist characters just turn up to spout clunky exposition when needed and range from underused (Idris Elba), pantomime villain businessman (Mark Rylance), hammy over-the-top traitor (Javier Bardem), token woman and all round damsel in distress (Jasmine Trinca) and of course, Ray Winstone (Ray Winstone).

As the extremely generic and lacklustre ‘plot’ develops, each ‘revelation’ can be predicted way before it happens (well, can be predicted if you were to actually care – which is often almost impossible!) and staying interested and awake becomes quite a challenge. Generic action films can be fun, but in the case of The Gunman, they can also be painfully dull and an insult to the intelligence of the average cinema goer. The only good thing about The Gunman is that at least Sean Penn got the most out of his gym membership!

Typical lazy b-movie drivel, but starring an Oscar winner who overdid it at the gym; The Gunman not only has a lazy, generic and predictable plot with dull action sequences, but forgets to even consider that we may want to have a protagonist to actually route for. Utter Rubbish.