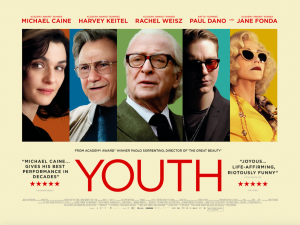 Retired composer Fred Ballinger (Michael Caine) is on his annual summer vacation at a Swiss Spa with his lifelong friend, famous screenwriter Mick Boyle (Keitel). However an invitation to perform for Queen Elizabeth II causes Fred to analyse and question the life he has lead.

Paolo Sorrentino’s recent films have certainly produced divided opinions; some have described them as sumptuous masterpieces, others as style over substance pretentious nonsense. Sorrentino certainly does not like to stick to convention and Youth has certainly proved to be just as divisive as his last film, the Oscar winning The Great Beauty. Though there are certainly many pleasures to be had from the performances, the stunning visuals and plethora of philosophical ideas, Youth is also very bloated, ill-disciplined and a tad too creepy at times.

These flaws and problems are very much a shame, as with more rigorous discipline Youth could have been an exceptional film of deep intelligence and poignancy. The main problem for me is that Sorrentino tries to cram too much in, with way too many characters, subplots and visual metaphors, many of which are often quite frankly pointless and achieve nothing nor add anything to the overall narrative experience.

All these other narrative elements undo the good work of the main narrative and the story of its protagonist. Fred Ballinger is at a time in his life where his own mortality is increasingly dominating his thoughts, and both his experiences of watching/ interacting with fellow guests and conversations with Mick and his daughter Lena allow him to question and analyse the life he has lead as well as bigger questions about life and mortality. This provides the film’s best and most engaging moments as these moments contain within them a deep poignant sense of melancholy and also a fair amount of subtle, dry humour.

These moments are also enhanced by the performances: there is always a risk when casting Michael Caine that people will not believe in the actual character and in the case of  Youth just see it as Michael Caine in a wig, but his excellent performance means we do believe in the character and genuinely care for him. Excellent support is also provided by Harvey Keitel and Rachel Weisz, and their share genuine on-screen chemistry with Caine.

The film’s visuals are stunning, with Sorrentino utilising the film’s setting and the luscious and immersive visuals do justify the film being seen on the big screen. The visuals also do provide a perfect accompaniment to the themes of the narrative, especially the montages of the Spa’s guests and the visual metaphors that do work.

Sorrentino is never afraid to encompass a broad range of themes and ideas in his films, and though it is admirable ambition, it ultimately does often undo the good work of the rest of the film, leading to a bloated, disjointed mess. Though the subplots involving the individual stories of the characters played by Keitel, Paul Dano, a meditating Monk and Diego Maradona (!) add to themes of the protagonist’s story, they do ultimately feel like unwanted and unnecessary distractions. Keitel’s attempts at writing his new screenplay with his team of young writers adds nothing, but admittedly the scenes he has with Jane Fonda (in a very brief, but excellent performance) do add an essential element to the plot, meanwhile Paul Dano’s character could have been easily removed completely. There are also scenes where Caine and Keitel watch a topless Miss Universe in their swimming pool, though it admittedly does fit in with the film’s themes, how it is presented just comes across as very creepy.

Sorrentino is obviously a very talented director and his single minded vision should be applauded and respected, but once again his tendency to overstuff his films has ultimately proved to be his downfall.

A true mixed bag of a film; while Youth contains some stunning and immersive visuals, great performances and some genuinely engaging, poignant and funny moments, Sorrentino often undoes a lot of his good work by having a tendency to overstuff and overcomplicate things.