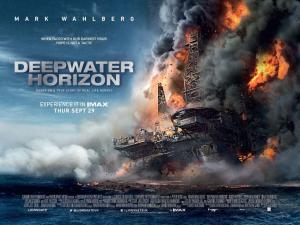 So far in his career behind the camera Peter Berg has certainly made films that are, shall we say, somewhat lacking in any kind of visual subtlety. He often struggles to produce any kind of cohesive, emotionally engaging or, quite frankly, half-decent narrative structure (Battleship, anyone?), but his approach to making films as loud as possible is certainly, in theory at least, a decent fit for the true story that Deepwater Horizon tells.

It is a disaster movie, so the story is very straightforward to tell in terms of structure, and indeed quite difficult to get wrong; While characters have to be reasonably likeable, actual character development is not that important as what they are up against and their fight for survival is what eventually drives the plot. Of course disaster movies do have some moral message behind them, and again this is certainly depicted in a less-than subtle way in the film’s first half.

Indeed, the films storytelling and script by writers Matthew Michael Carnahan and Matthew Sand is certainly conventional, if indeed rather primitive. That is not necessarily a bad thing, as Deepwater Horizon was never going to be any more than a popcorn blockbuster with someone like Peter Berg at the helm.

The first half is all dialogue; we get a brief introduction to a few characters to prove that they are, well, people and then they land on the Deepwater Horizon and we are introduced to a humongous amount of characters who spout out naturalistic dialogue while the whole thing is edited to within an inch of its life. The whole thing is chaotic and at times impossible to really follow due to the jargon and just general extreme pace of the whole thing, but perhaps in some way an accurate depiction of how it actually was and Berg’s attempt at raw authenticity. Either way, the gist of it is that some people should have done some tests, but they didn’t, and the greedy BP executives do not care.

Once the exhausting first half is sorted out then the inevitable happens, and now Peter Berg gets to unleash, and unleash he does! It was very much the intention of Berg and everyone involved to go for authenticity by building a huge set, using as little CGI as possible and even making the cast go to oil school. There is no denying that this proves to be very effective as Deepwater Horizon is very much a raw, visceral (and very loud) cinematic experience. The action sequences are fantastically staged and put together by Berg; I still have no doubt he still doesn’t really have much of understanding of storytelling, but he does know how to put together a good action sequence, and this is definitely where Deepwater Horizon does excel. This is a film that deserves to be seen on the biggest screen with the loudest speakers possible.

However, as well staged as the action is, because there are so many characters and the storytelling is not great it is hard to feel truly involved and share the true sense of danger with the characters. Apart from of course the familiar faces that star in this film, it is sometimes impossible to know who has died and who hasn’t, and it does take the viewer out of the moment slightly. However, the chaos is, I am sure, part of the authenticity that Berg went for and the second half does have some very well put together moments and there is certainly a fair amount of tension.

The performances are solid, but this was never going to be the kind of film that ever required great performances, just competent ones. Though John Malkovich does go a bit over the top with his scenery chewing and over-emphasised accent as a nasty profit obsessed BP executive.

Though Deepwater Horizon is first and foremost an action blockbuster made to thrill and entertain, it is about people that died very recently, and at the end does pay a fitting tribute to those that did die in this disaster and does feel to be more than just a cynical cash-in, but does ultimately lack any real genuine substance.

A loud, visceral and raw disaster film that certainly features some very well put together action sequences that are genuinely thrilling, but its overall lack of cohesive storytelling does ultimately render Deepwater Horizon as just another forgettable blockbuster yarn.