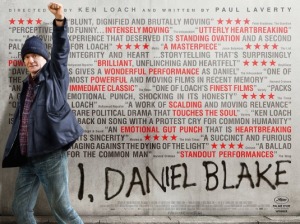 Despite just having a major heart attack and being told by his doctor that he is not ready to go back to work, Daniel Blake (Johns) is passed as fit to work during a benefit eligibility assessment and can therefore only apply for jobseeker’s allowance and must apply for work or face sanctions. While at the Job Centre Daniel befriends Katie (Squires), a young single mother of two children, and the two of them try to find a way out of the extreme and desperate poverty they experience due to the unforgiving welfare state.

Throughout his long and distinguished career, Ken Loach has certainly not been afraid to make a statement and deliver it in an uncompromising and hard hitting way, and I, Daniel Blake is certainly proof that despite turning 80 this year, Loach has lost none of his fight and passion. There is no doubt that while watching I, Daniel Blake that this is a work of intense personal passion and a document of fierce relevance to our current time and the state of Britain, however it is not a film without flaws and at times these flaws do threaten to undermine the obvious statement that the film is attempting to make.

I certainly do not want to question the integrity of the research that was made for this film, but there are certain aspects of the film’s narrative that do feel contrived and almost exaggerated for both the narrative’s convenience and the political agenda of its director.

I, Daniel Blake is of course first and foremost a fictional film, but it of course places itself as very much a prevalent document of what is happening to so many people in Britain right now, with undoubtedly an agenda influenced by the very strong political views of its director. With a film of this very pertinent, emotive and relevant subject matter it is almost impossible not to draw on both personal experience and opinion, and I am sure that is very much the intention of Ken Loach, as there is not only clear passion, but actual anger in this film.

However, due to the film’s intentionally naturalistic approach, as someone reviewing it I feel that my own personal experiences of the welfare system both directly and indirectly are therefore relevant to my opinion of the film, and I have certain personal experiences that would contradict with some moments within the narrative. This does not mean that I am saying that some narrative elements are false or completely inaccurate, as there are millions of people in the UK that rely on our welfare system and possibly have experiences that would contradict my own personal ones, but they do not fit with my own experiences.

This also does then beg a key question; should I, Daniel Blake be analysed as purely a fictional piece of narrative filmmaking or as a document of current times. Well, my personal opinion is that it works very well as both and is certainly engaging and compelling viewing, and is made with unquestionable passion. However I can certainly bring in to question both I, Daniel Blake as both a fictional piece of narrative cinema and as a supposed documentary of 21st century Britain as there are certainly flaws with both elements of the film when considered on these terms.

There is firstly no denying the rare power and passion that I, Daniel Blake is made with; in a world where so many films are just made for the sake of making money it is very much refreshing to see that directors like Ken Loach are making films with an intentional message at their very heart. Structurally, the film is quite episodic and disjointed, but this film was made as a statement to make the viewer think, and it certainly achieves that goal.

The film’s two main characters are deeply engaging and relatable, and the audience can immediately sympathise with them, and this makes for a compelling film as we most certainly care about these characters and the trials and tribulations that they face throughout the narrative. The two performances from Dave Johns and Hayley Squires are undoubtedly exceptional and these performances play a pivotal role in making the film such engaging viewing and the characters sympathetic and relatable.

However, despite this, the film’s obvious political agenda does often undermine both the engagement and power, with certain narrative choices that seem to be clouded by Loach’s strong political agenda that ultimately cloud his overall judgement as a filmmaker. We therefore get the apparent misery and suffering of the film’s two main characters and what causes this sometimes just emphasised too much and what causes this is a little too contrived and forced. Meanwhile the depiction of some of job centre staff does feel like unfair (and therefore cheap) villainization of people that do have to do very difficult jobs, but it does feel that I, Daniel Blake at times does portray them as cheap and lazy caricatures to suit the director’s political agenda.

Likewise, certain narrative choices lead to the film feeling contrived; a key scene involving graffiti feels forced and a key part is based on a stereotypical view on Scottish people, there are completely irrelevant subplots, while the film’s ending is unnecessarily bleak and particularly contrived. I do understand that Loach is trying to emphasise a certain point, but in my opinion the ending just feels forced, contrived and bleak for the sake of being bleak, and does slightly undermine the argument Loach is trying to make.

In this day and age of films being made solely for the sake of making money, it is of course highly refreshing to see that the likes of Ken Loach are still making films of both raw passion that contain a political message with the intention of being a relevant document of current times. I, Daniel Blake will engage and most certainly infuriate those that share the director’s political agenda, but does ultimately not tell the viewer anything they do not know already and is ultimately a quite forgettable and flawed film. Unfortunately, there are a fair few elements of this film that make it preachy and just like a lecture; we see films to be entertained, engaged or moved, but not to be lectured.

A film that is powerful and flawed in equal measure; I, Daniel Blake is a film made with undoubted and commendable passion, but the film’s narrative flaws and blatant political agenda do ultimately somewhat undermine that passion and the films ultimate emotive power.