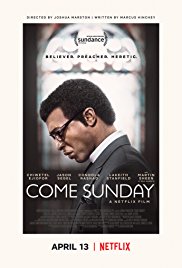 Bishop Carlton Pearson (Ejiofor) is a rising star in the American Pentecostal church, with thousands joining his church and attending his sermons. However, after he re-evaluates parts of the bible and questions the existence of hell, he is declared a heretic and is ostracized by the church he served with such dedication for 40 years.

So, we have yet another Netflix original, and as much as it is good that anyone (with a Netflix membership) can see these lower budget films instead of them having an inevitable very limited cinema release, but the jury is still out as to Netflix’s creative choices with their films, as for every Annihilation there is an abundance of very average films.

Unfortunately Come Sunday is yet another one of these very average Netflix offerings, as despite having powerful source material and some initial promise, it descends into a repetitive and unengaging melodrama that seems to not really know what to do with itself.

The true story that is based on a This American Life radio segment about the life of the real-life Pearson certainly sounds like a compelling one, and Pearson himself is definitely a protagonist worth routing for as there is no doubt that he is a good man with honest intentions. This is also helped by a magnetic performance from Chiwetel Ejiofor as the protagonist; he commands the screen and certainly adds the necessary integrity to the character of Pearson, making sure that his individual character journey is believable.

Some of the film’s earlier scenes of Pearson delivering his sermons are electrifying and so are the scenes when he starts to have the change of heart and asks some awkward questions, leading to many of the congregation to heckle him and eventually walk out mid-sermon. There is no denying that the character of Pearson asks some very intriguing theological questions that could provide absorbing viewing even to those who are not religious. However, after that we only have a few scenes that initially make any kind of attempt to examine these questions, such as the one where Pearson comes to face to face with the Joint College of African-American Pentecostal Bishop or when Pearson debates with Martin Sheen’s smarmy preacher Oral Roberts. However, these have unsatisfactory individual conclusions.

Overall Marcus Hinchley’s script seems to shy away from really getting its teeth into the interesting questions that the narrative initially raises, and many potentially interesting scenes fail to have any kind of satisfying ending, and the second half of the film feels very repetitive. Within the context of narrative Pearson sacrifices a lot, but yet the narrative and script fail to truly capture this. There is also a subplot involving Lakeith Stanfield’s homosexual organist who is suffering from an Aids-related illness, but the script is way too casual and dismissive in how this character questions the obvious issues of his religion and sexuality with Pearson.

The only one offering any consistency is Ejiofor, who delivers a magnetic and committed performance in every scene, but he cannot save the film from descending into uninvolving mediocrity. When films fail to do justice to the power of their source material, it suggests a documentary may have been more effective.

Despite some very powerful source material, a superb leading performance and an initially promising start, Come Sunday descends into a rather uninspiring and uninvolving melodrama, and therefore yet another Netflix film for most to avoid.