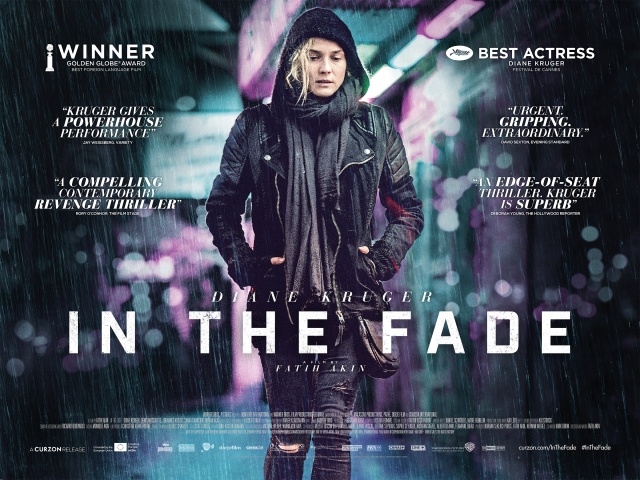 After her husband and six-year-old son are killed in a bomb attack, Katja’s (Kruger) life is torn apart, and when the two suspects face trial, she is pushed even further in her relentless quest for justice.

In terms of its overall narrative, Faith Akin’s drama does sound quite generic, well it is thankfully more than that (at times) thanks to its raw approach to what is a very topical issue in Germany, but its three-part-narrative approach to its subject matter produces a strange genre hybrid of a film that gives mixed results that has an overall lack of focus. The film does not seem to want to take an exact position in terms of both where to take its narrative and how to examine the narrative’s subject matter, producing a drama that if often engaging in individual moments, bit is overall unsatisfying.

Each third of the film has its own title, and the first focusses on Katja’s grief as she deals with the loss of her husband and young son. In a performance that deservedly won her best actress at Cannes, Diane Kruger gives a stunningly committed performance, and it is a truly gripping and moving first third as she has to deal with dealing with the extreme levels of grief, but also the police questioning her because of her drug use and her husband’s previous life. The camera often tightly locks on to Kruger and her face, and it makes for a first third that is at times harrowing, but deeply gripping. However, Kruger suspects that this atrocity was committed by Neo-Nazi activists and through some rather jarring narrative contrivances, her suspicions are proved to be true.

The film’s second third focusses on the ensuing trial of the two suspects and becomes a courtroom drama. As co-plaintiff (despite the initial protest of the defendant barrister) Katja is allowed to attend the entire trial, with the camera once again tightly focussing on her as she has to hear some of the graphic details of how her son and husband are killed, while also listening to the testimony of the defendants. There are some genuinely compelling moments that are extremely well-written and acted, with Johannes Krisch as the defendant’s barrister being a standout. Once again Kruger is excellent, and despite the occasional narrative contrivance the film is still very gripping and intriguing, as well as being written with seeming intelligence and observation for its topical subject matter.

The verdict of the trial leads to the film’s final third, and this is where it turns into a half-baked revenge thriller but lacks any kind of focus or conviction. There does seem to be a slight attempt to question what vengeance truly is and what it actually achieves, but it feels that Akin is now just trying to fill the runtime as Katja ums and ahs about what she is going to do, and the only thing that is consistent is Kruger’s fiercely committed performance. It produces a very frustrating feeling of anti-climax, as it really feels that Akin wants to simply draw our attention to a very topical issue in Germany, and though these are certainly the right and admirable initial intentions behind this film, if you are going to make a character-driven narrative that examines this subject, then you need to have a bit more actual conviction and narrative focus.

Despite being made with raw passion and being about a very topical subject, In The Fade lacks the narrative focus and conviction to be as memorable or as engaging as it could have potentially been, and is a waste of Diane Kruger’s exceptionally committed performance.

An extremely passionate and (semi) opened minded film reviewer, with a hint of snobbish.
View all posts by MoodyB →
This entry was posted in All Film Reviews, World Cinema and tagged Diane Kruger, film, film review, foreign films, world cinema. Bookmark the permalink.