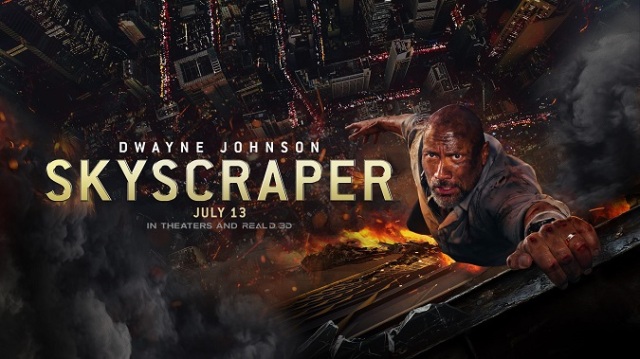 Former FBI agent and war veteran Will Sawyer (Johnson) now works as a security assessor for skyscrapers and is assigned to assess the world’s tallest skyscraper in China. However, the building is attacked by terrorists, who set the building on fire with Sawyer’s family inside and frame him for it. Now a wanted man, Sawyer must evade arrest, clear his name and somehow enter the skyscraper to save his family.

There is no denying that Dwayne Johnson has forged a very impressive career for himself, he is someone I would not consider to be an actor as such when considering the purest definition of this word, but a movie star (very much in the Tom Cruise vein). I do not mean that as insult, as he is someone who has an undeniably likeable and charismatic screen presence and is always very watchable in every film that he is in and has very impressively established himself as the go to go guy to be the seemingly indestructible leading man in expensive, loud, switch-your-brain-off blockbusters. However, after the disappointing and nowhere near is fun as it should have been film that was Rampage, I must confess that I was starting to worry that The Rock was just starting to become a cliché of himself and just accept his fate and star in very mediocre films. This would unfortunately lead to a sigh or groan when seeing a film with him as the leading man, as opposed to an element of interest or excitement.

I must confess that because of the bitter taste left by Rampage my initial reaction to Skyscraper was the ‘hear we go again’ groan and then when I went to see it at the cinema at a peak time in the film’s first week of release and there were only a total of no more than 6 people in the cinema screening I attended, my initial thought that was my groans were not only appropriate, but also shared by the rest of the cinema-going public and that maybe Dwayne has lost his touch. For a good long while Dwayne Johnson has given us films where the trailer tells us everything we need to know, and so our sole purpose of venturing out to our local flea pit and spending the best part of a tenner is to not have any questions that need answering, but just be entertained. Well, I am pleased to say that Skyscraper does actually deliver on the entertainment factor and is worth a watch on the big screen.

The fact is that if you have seen the trailer for Skyscraper, then you have pretty much seen the film and can figure out exactly what happens to whom, when it happens, and how. However, thankfully writer / director Rawson Marshall Thurber seems to be very much aware of the fact that he is making a film that is not only a dumb, lowest-common-denominator blockbuster starring Dwayne Johnson, but also one that rips off many other films. With this obvious self-awareness, Thurber makes sure to have as much fun as possible, making his leading man perform some ridiculous stunts that include jumping from a crane to a skyscraper and climbing along the side of a skyscraper with his hands covered in duct tape. The film industry may have its serious method actors, but surely if you need an actor that can convince as someone who can climb the side of a skyscraper using duct tape than Dwayne is your man!

The script itself is full to the brim with clichés; we are given an opening sequence set 10 years earlier in which our hero is a hostage negotiator in a situation that goes very wrong, and the loss of a leg and a marriage to the doctor that saved his life later, we are at the present day and Dwayne’s character proudly claiming that he hasn’t fired a gun for 10 years. Oh, he also has a fake leg which is both conveniently forgotten about and also used to save our protagonist’s life in equal measure! The film’s relentless ticking off of clichés is actually almost a fun exercise for the audience to take part in as we not only try to spot the plot devices stolen from other films, but also the tried-and-tested clichés. Minor pedantic nit-pickings such as logic, gravity and medical science aside, there are also some painful plot holes and flaws, but they are so blatant that is seems that Thurber actually unashamedly embraces them!

Trying to criticise Skyscraper does feel quite a pointless task, as it is a film that only seems to embrace its many problems and flaws, and only seeing the poster (let alone the trailer or actual whole film) makes it quite obvious what these will be. However, there is no denying that it is a film that just wants to have some fun, and thanks to its leading star does succeed in that. Therefore, if watched with the brain very much switched off, Skyscraper is a perfectly enjoyable 100 minutes of audaciously entertaining nonsense, and proof that The Rock still has got it.

As everything about it suggests, Skyscraper is an audacious, cliché-ridden piece of cinematic silliness, but thanks to its unashamed embrace of its countless flaws and undeniable ridiculousness (as well as its choice of leading man) is a perfectly passable piece of vacuous entertainment.

An extremely passionate and (semi) opened minded film reviewer, with a hint of snobbish.
View all posts by MoodyB →
This entry was posted in All Film Reviews, Blockbusters and tagged Blockbusters, dwayne johnson, entertainment, film, film review, Neve Campbell. Bookmark the permalink.