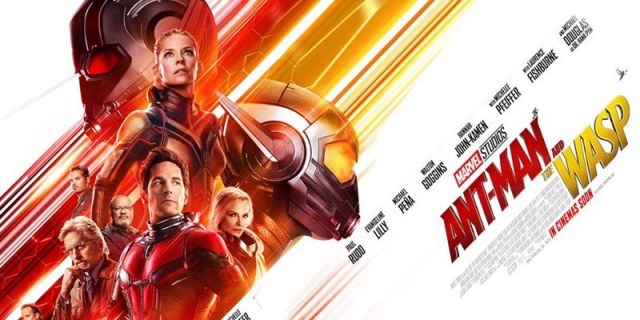 After deciding to fight alongside Captain America, Scott Lang (Rudd) faces the consequences of the choices he has made and the struggles of balancing being a superhero and responsible father. He is however then confronted by Dr Hank Pym (Michael Douglas) and Hope Van Dyne (Lilly) with a brand-new mission, and Scott must once again put on the ant-man suit and join Hope as the wasp to uncover secrets from their past. However, they are also faced with a deadly and powerful new enemy.

After the very heavy and emotionally exhausting fate of the universe being at stake in Avengers: Infinity War, Marvel has a couple of films to fit in before sorting out what happened in that film, and a perfect antidote to that is surely returning to its smallest character and having a much smaller-scale story? Well, though it certainly does intentionally fit within the timeline of what happened in Infinity War, there is definitely an intention to stick to the formula of generally keeping things light hearted that made 2015’s ­Ant-Man such good fun. It was by no means the best or essential film of the MCU, but it was a thoroughly enjoyable film with a good balance of action and comedy, as well as being a film that can be seen and enjoyed on its own terms.

Though it is not quite as good as its predecessor, thanks to never taking itself too seriously Ant-Man and the Wasp is still a thoroughly enjoyable film with plenty of big laughs thanks to some sharp dialogue and some great and very likeable performances. The plot itself is very small in scale; it is simply are heroes embarking on a mission to try to find Hank Pym’s wife (who was the original The Wasp) who has been trapped in the Quantum Realm for decades, while the film’s main antagonist (Ghost – played by Hannah John-Kamen) tries to stop them as she needs their technology to not take over the world or anything, but simply save herself. Throw in the fact that Pym and Van Dyne are on the run the from the FBI, our hero is under house arrest and a dodgy and dangerous businessman (a scenery chewing Walton Goggins) who wants the technology for himself, and there is your rather generic plot.

The plot itself is indeed rather generic, and so therefore predictable, and thanks to this and the tendency to go for a light-hearted tone means there is never any sense of true danger. One the main issues with Ant-Man was a very generic and forgettable villain, and though Ghost is not really a true villain in terms of the motivations behind her actions, her character is underdeveloped and forgettable, and so both her and Walton Goggins’ character end up being very lazily written plot devices to fill the running time, which is a shame. Though it is still better than the very poor Black Panther.

However, what does save the film are some of the very well-written and frequent comedic lines and the performances, which help to make the main characters sympathetic and engaging. When Edgar Wright was originally casting for the role of Scott Lang / Ant-Man (when he was going to be directing it) he made it quite clear that he wanted the character to be an everyman – well, as much as any character in a superhero film can be! However, not only does he of course have a great ability with comic timing, but Paul Rudd does make sure that we can empathise with his character and the fact that first and foremost, he wants the best for his daughter, while he is a reluctant hero who always has the best of intentions but has a tendency to make mistakes and rash decisions.

Rudd also shares good chemistry with Evangeline Lilly, while Michael Douglas once again seems to enjoy himself in a role that is rather quite straight forward for an actor of his experience to play. Meanwhile a very fast-talking Michael Peña is once again hilarious as Lang’s bets mate and business partner, without ever being too annoying, and Randall Park gets some very funny lines as the FBI agent whose job it is to make sure Lang does not leave his home, and the two of them have some hilarious bickering. There is also once again some great visual comedy that takes advantage of what Pym’s technology can do to objects.

As plot goes on everything is admittedly a little too predictable, and though the San Francisco set action sequences are good fun and well-staged with a comic line always around the corner, they are never truly thrilling due to the overall lack of danger and predictability of the narrative. However, the much smaller focus of this film means there is no real requirement to see other MCU films, and so this can be enjoyed in its own right, which is nice. In this day and age of blockbusters either taking themselves too seriously or being CGI explosions, Ant-Man and the Wasp is a nice, watchable and light-hearted antidote to that, but not one that will linger long in the memory.

Marvel’s smallest hero also has a film with the smallest scope, and though this and the often very effective tendency to keep things light hearted makes for a very enjoyable and often very funny film, the generic plotting does also make Ant-Man and the Wasp a little forgettable.