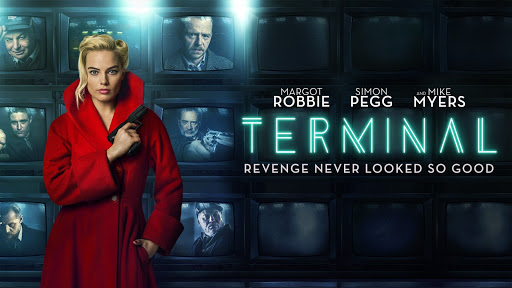 In a dark city the lives of two assassins carrying out a dark mission, a teacher battling a fatal illness, an enigmatic janitor and waitress leading a double life all intertwine, seemingly at the hands of a mysterious criminal mastermind who is hell-bent on revenge.

Some directors seem to have a single, unique vision for their film despite whatever budget constraints they may have, and usually is to be applauded as even if they fail, they at least fail on their own terms. Well, with Terminal it seems clear what writer / director Vaughn Stein is trying to do, but his attempts to make some supposedly slick and atmospheric neo-noir rip-off just fails to hit the mark despite being potentially quite fun and featuring a decent cast.

Terminal is certainly by no means a terrible film, and it is just about watchable thanks to its cast and often being unintentionally funny due to its over written script and generally being a little too pleased with itself. The plot does indeed feature a few twists and turns, while the visuals provide a reasonably atmospheric (if once again slightly over done) setting, even though the set design feels like it just uses the discarded parts of a Nicolas Winding Refn film (which is NEVER a good thing!). Stein seems to think his film is a lot smarter than the audience (it isn’t) and so often over explains its generally quite predictable twists and turns, which feels quite insulting at times.

What does help to make the film just about watchable is its admittedly impressive cast, even if their performances are a bit strange. The film is supposed to be set in this ‘mysterious’ and ‘unknown’ place, but everyone puts on accents like they are in a Guy Ritchie film – apart from Dexter Fletcher, who always talks like that anyway. In the lead role Margot Robbie seems to be truly enjoying herself and letting her hair down after some of the more serious and demanding roles she has taken on recently, but has a tendency to overact a bit too much. While, how Mike Myers (remember him?) was persuaded to make the this the first film he has been in for ages is probably a question that is more interesting than anything the film’s narrative has to offer, and his performance is just a bad impression of his Austin Powers.

Meanwhile Simon Pegg is decent enough in a role that is not any kind of challenge for him, Max Irons does what he can with a very lazily written character that is only there to form a narrative function, but the films main star is Dexter Fletcher; I am very surprised that he is not a producer of this film, as the script seems to be written for him and his, err, unique talents as an actor; his opening line is “F**k off you ponce!” and from then on every other word seems to be “wanker” or “bollocks”. Fletcher’s delivery of the often sweary dialogue he is given produces many unintentional moments of comedy and saves what is otherwise a quite dull ‘thriller’.

As it reaches its conclusion, the ‘twists’ get increasingly over-explained and it is increasingly hard to care about them, making Terminal an increasingly silly film that takes itself quite seriously, and one that will be forgotten about in an instant.

A bizarre mess of a film that feels like the unwanted bastard love child of Nicholas Winding Refn and Guy Ritchie; Terminal is only just about watchable because of its unintentional comedy value.