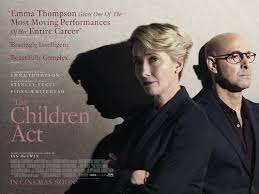 While she is in the midst of a personal crisis involving her marriage, a High Court judge (Thompson) faces a life or death decision to make in a case involving a boy (Whitehead) that requires a lifesaving blood transfusion, but due to their deep religion his family refuse the treatment.

So, only a few months after On Chesil Beach we have yet another cinematic adaptation of an Ian McEwan novel in which he yet again adapts it himself into the screenplay. I have not ever read an Ian McEwan book so cannot compare the book and film, but this is now the second film in a row that suffers from not quite working as a film and the whole not being as great as the sum of its parts.

Perhaps the problem stems from McEwan being the one that adapts his own novel and him not quite appreciating the essential differences between the two mediums, but the overall narrative structure to The Children Act just produces an episodic, disjointed and overall unsatisfying experience, while though the film is competently made it does feel like a TV drama and so a little out of place on the big screen.

This is all a shame, as just like On Chesil Beach, The Children Act does have a narrative that features some potentially very powerful themes and has faultless (and ultimately slightly wasted) leading performances. While, the structure of the narrative actually leads to what is advertised as the film’s dramatic crescendo being more in the middle, and what unfolds afterwards just feels too contrived and some of the narrative developments a little too unbelievable, undermining some of the potentially very powerful and interesting themes that the narrative tries to examine.

Unfortunately if the film did not feature such great performances it would definitely be even worse; as the lead role Emma Thompson delivers a performance of great emotional depth that truly elevates her character from the slightly cliched script, and even though many of us will have very little in common with her (in terms of her very comfortable middle-class lifestyle) her often very raw and committed performance makes sure that we do empathise with her and her character’s deep internal conflict and struggle – something Thompson skilfully depicts brilliantly through actions, body language and facial expressions. In her role as a high court judge she has to suppress emotion, and because of her dedication to her work, this is how she lives her entire life.

The always excellent Stanley Tucci is once again great in his role, his character gets far less screen time than Thompson’s, but this is one of the narrative decisions that the film gets right, as this film is about Thompson’s character, but there is enough of Tucci’s character for him to be sympathetic and not a just a two-dimensional asshole. Meanwhile Fionn Whitehead is excellent as Adam, the boy at the centre of the court case, but what his character does afterwards is handled very poorly by the narrative. Ben Chaplin is also excellent as Adam’s father and gives a very powerful performances in the few, but very important scenes that his character gets.

It is hard to hit the nail on the head as to exactly why The Children Act doesn’t work anywhere near as well as it should, but its narrative structure is the main issue, and though it does provide a good amount of narrative closure at its ending, there is just something lacking throughout, which is a shame and a waste.

Despite featuring some excellent performances and containing some potentially interesting and engaging themes, The Children Act doesn’t quite capitalise on this thanks to a disjointed, episodic and ill thought out narrative.