Following the recent dramatic events that culminated with the Avengers final showdown with Thanos, the entire world is dealing with the aftermath. Trying to get away from all of that as well as the added pressure of being Spider-Man, Peter Parker (Holland) goes on a school trip around Europe but finds himself in the middle of a new global threat.

Despite the extreme heaviness of Endgame, the seemingly unstoppable money making juggernaut that is the Marvel Cinematic Universe has to go on, and as seems to be the tradition, they follow-up a heavy, fate-of-the-planet epic with a much lighter in tone film with a more insular story. After Infinity War we had Ant-Man and the Wasp, and so after Endgame we have Peter Parker’s second solo outing as part of the MCU. This was apparently always intended to be the final film of ‘phase 3’, and as much as a lighter and more fun film was almost needed as an antidote to Endgame, considering its ending, that was always going to be tricky.

I am not necessarily referring to our main heroes – that has all been sorted out, but what about the half of the normal human population that have suddenly returned from ‘the blip’ (as it is referred to in this film)? the other half of the population has spent the last five years getting to terms with what happened, while (as confirmed in Endgame) cities are decimated, and then suddenly everyone returns – while those that remained aged five years and got on with their lives. There is so much here that it could be in a whole film in itself, and though I appreciate that this should not be the main plot point of Far From Home, it almost sums it up as a film in that there are a fair few subplots that the filmmakers try to use to develop the narrative, but then their tendency to casually forget about them makes for a viewing experience that is often fun and enjoyable, but overall unsatisfying and at times a bit of a mess. In the various global locations used there are often paintings paying tribute to Tony Stark, like some heavy burden that will not leave Peter. Though Peter Parker’s relationship with Stark does form the emotional backbone of the narrative, it does once again feel like the film could have gone further with it to engage with the film’s key main themes instead of often feeling like they are underdeveloped and do at times feel like lazy contrivance.

As with most of the solo outings in the MCU (Ant-Man, Thor, Guardians of the Galaxy etc) there seems to be an intention to make them more comedic and feel like they are on a smaller scale. This can sometimes as work as the threat of their being an inevitable antagonist within the smaller scale and more personal tone of the narrative means that we are just as involved as because within the context of the individual narrative it can still fell if the entire world were in danger (this worked very well in Shazam!). However, the intention to make things lighter and more comedic, though potentially appropriate for the protagonist (he is a teenager after all), just feel underdeveloped and lead to a lack of there being any true sense of danger or threat, while some of the more comedic moments do not always work. The threats that eventually (and inevitably) do turn up are just CGI contrivances and laziness, and so do not create as much danger as they really should have done, even if they do look visually impressive. 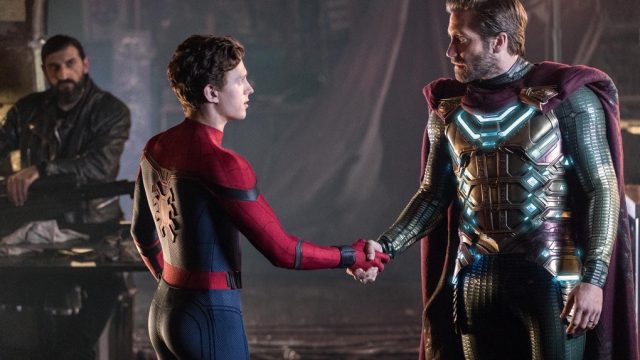 We do care about Peter Parker, and we do want him to win the heart of the girl he loves, but it is just hard to care about everything else that happens. I do not regard it as a spoiler to say that Jake Gyllenhaal’s Quentin Beck is the bad guy (he then conveniently decides to use the nickname of Mysterio that Peter’s friends give him), and as good as Gyllenhaal is in the role once he gets to flex his square chawed acting chops when his character’s true intentions are revealed, it just feels like the film’s bad guy is a subplot within itself. One thing the film does do well is utilise it’s antagonist’s unique abilities to create some visually thrilling moments that really do get inside the mind of Peter Parker and explore his deepest fears (the last time this was successfully done to heroic characters was Age of Ultron), but how this is then dealt with tends to rely on narrative contrivance, and so does ultimately feel unsatisfying.

The performances from all involved cannot be faulted; Tom Holland captures perfectly Peter Parker / Spider-Man’s youthful enthusiasm and naivety, as well as the pressure he puts on himself to live up to the expectations of his hero and mentor. The best comedic moments of the film do come from Peter’s best mate Ned, played by Jacob Bataon, who does often steal most scenes. Spider-Man: Far from Home is certainly a very enjoyable watch, but sadly will be one of the more forgettable entries in the so-called MCU, but the inevitable mid-credit sequence does provide a tantalising setup for spidey’s next adventure.

Endgame was always going to be tough to follow up, and though it does have some fun individual moments, Spider-Man: Far From Home just has too many subplots and a lack of clear focus to be anymore than an enjoyable, but highly forgettable finale to Marvel Studio’s phase 4.

A hobby blog dedicated to movie nerdom, cinematic escapism, nostalgia, a touch of empathy, and finding the next groundbreaker (oh, and the occasional horror flick for good measure). Comments and dialogue are encouraged. Next theatrical movie premiere: Tenet (moved from July 17, to July 31, to August 12, to Labor Day Weekend)