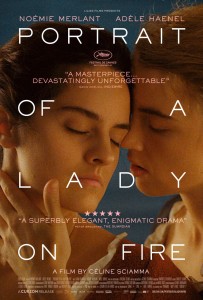 France 1770, A painter named Marianne (Merlant) travels to a remote island where she has been commissioned to paint the wedding portrait of a young woman named Héloïse (Heanel), who has just left a convent and is a reluctant bride to be. However, Marianne must paint Héloïse without her knowing, and she observes her day by day so to paint her in secret.

In film history (and indeed any area of the arts that involves any kind of storytelling) or indeed even in song writing, surely the most dominant theme involved has to be one persons love for another and how that is declared and (in the case of many films) how that develops. Well, at its very core Portrait of a Lade on Fire is a very simple and universal story about a very passionate, but ultimately forbidden (and therefore in so many ways a doomed) love between two people. How the film is told may well be quite complex (at the end of the day humans are very complex creatures), but underneath all of the subtext, expressions and gazes between two people is actually a very simple story.

This is very much intended as the highest of compliments, and is indeed what makes Portrait of a Lady on Fire such an incredibly watchable and engaging film; it is a film which may present a complex situation from a narrative point of view, but the themes examined at its very heart are simple, and therefore it is very easy to engage with. Writer / director Céline Sciamma proves very skilfully that less can indeed be more when a film is put together the right way; we are given two characters that share an obvious and passionate love for one another, but for various reasons it is a love that is doomed, and though this is by no means a new story, Sciamma skilfully presents it in a way that does feel fresh and original.

There is no denying that Portrait of a Lady on Fire is a slow-paced film, and this is part of the point; all involved manage to perfectly capture not only the sense of isolation from the film’s setting, but also take advantage of the unique variables on offer to a filmmaker to present their story, such as visual depictions of subtext that can only be demonstrated by glances by characters or their body language. A mere look from a character can speak hundreds of potential words of dialogue, and Sciamma skilfully utilises film’s unique ability to depict this.

Though the story itself may be undeniably simple when described in words, not only in terms of the plot development, but also its small number of characters and seemingly simple location of a big, empty house that is located on a remote island that is exposed to the elements. However, how it is depicted and put together is of course far more complex, and it is certainly put together with painstakingly intricate and intimate detail by writer / director Céline Sciamma. Every shot means something, not only in the small details of the character’s tone of voice, small looks or body language, but also the set design and composition – or even just the contrasting colours of the clothes they wear. The house and the island also feel like key characters within the narrative, and the use of sounds and colours do truly make the audience feel like we are on this island with these characters in what is a deeply cinematic experience. It is a film about details, just like with a painting, as the characters often observe and occasionally discuss the tiny little details about one another that make them equally unique and fascinating.

As the narrative develops the tensions and passions build and we cannot helped but be gripped and mesmerised by what happens, even if we cannot help but know to a certain extent what will happen overall, but this actually helps to add  sense of poignancy to the proceedings. There is a third main character, Héloïse’s maid named Sophie, who admittedly does serve a function to provide a certain amount of exposition, but this is never overdone and only serves to provide the required level of context to what then happens within the narrative. Sophie does also get her own individual story within the narrative too, which effectively adds to the drama without detracting from the main story.

As the two main protagonists, Noémie Merlant and Adéle Heanel give two incredibly nuanced and understated performances that makes sure that we do truly care about them and believe in every aspect of their relationship. No matter how well a film can get every other element right, if the performances are not good enough (especially with such a character-focussed story like this) then it is doomed to fail, but the characters are as note-perfect as the rest of the film, and this all combined produces one of the more unique and unforgettable cinematic experiences of the year.

A film that is cinema at its purest; Portrait of a Lady on Fire is a deeply gripping and utterly mesmerising experience for all the senses.