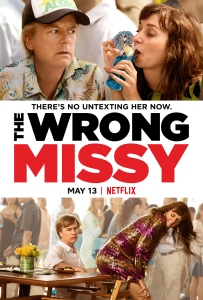 After bumping into his dream woman in an airport Tim (Spade) invites her to his work retreat to Hawaii. However, he accidentally invites a crazy woman of the same name (Lapkus) that he had a disastrous first date with previously. Hilarity inevitably ensues.

If there is something in the world of film that I dislike more than a film with Adam Sandler in it (with a very few noted exceptions), it is films starring Adam’s Sandler’s friends and family – who basically only have film careers because they are indeed Adam Sandler’s friends and family. Well, this Happy Madison Productions film is yet another hideously unfunny piece of cinematic self-indulgence from Sandler and his talentless pals and relatives, and though Sandler himself is not in it (well Adam isn’t, but there are a few other Sandlers), The Wrong Missy is very much of the usual low standard of his Netflix output that seems to show total contempt for audiences. Not only that, but it also includes  the trademark holiday porn that so many Sandler films tend to contain, so the fact we just get to watch the cast go on a lavish free holiday is further insult to injury – especially in these times when most of us are hardly allowed to leave our homes, let alone go on holiday!

The Wrong Missy is a film with no redeeming features (apart from one surprising and mildly amusing cameo near the end – which is what it gets the ‘1’ for) with poorly written characters that demonstrate absolutely no likeable qualities, and this is made even worse by the performances from the entire cast that seem to form into two groups – overacting to within an inch of their life or looking extremely bored and making it look like them having to sit in front of the camera and recite some terrible lines of dialogue is a massive inconvenience that is interrupting their all-expenses paid holiday.

I can only assume all involved thought that our protagonist is some kind of ‘everyman’, and there is no denying that most us are willing to invest in a protagonist that is a bit of a ‘lovable loser’, but the combination of abysmal writing and David Spade’s comatose performance that is a total charisma vacuum make his character impossible to like or relate to in any way. What however makes it worse is that his character has women attracted to him that are blatantly out of his league, and this glaring issue and the likely cynical reasons for it happening at all make an already wafer thin narrative concept completely unbelievable. 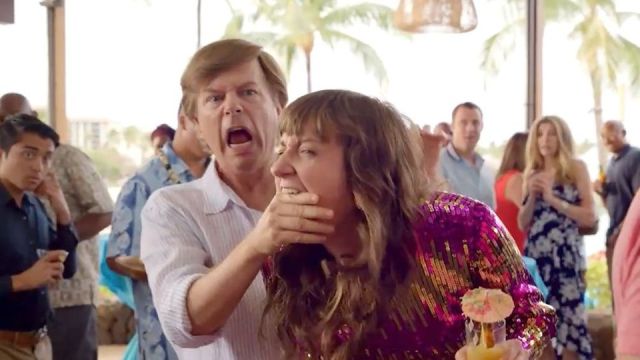 Naturally we get the standard narrative tropes of this type of genre piece, with some characters seeing the ‘error’ of the ways, some getting their just desserts and others ultimately redeeming themselves – it is obvious from the very start which characters these will be, and the lazy arcs are just cringe-inducing to watch. How this is dealt with is painfully lazy and insulting to the intelligence of the viewer, making what is already a hateful viewing experience (because of the irritating and unlikeable characters and abysmal performances) even more of an unbearable experience. I would implore all to avoid this detritus of a film, as the sooner we all stop watching these films from Sandler and his chums, the sooner Netflix will stop funding them!

At the time of writing The Wrong Missy is available to stream on Netflix – but please do not bother!