After their adoption of a troubled child goes tragically wrong, Ema (Di Girolamo) and Gastón (Bernal) struggle to deal with the aftermath of sending the child back for re-adoption. Consumed with deep feelings of regret, Ema sets out on a very dark personal journey to get the child back at all costs, no matter who she hurts along the way.

The narrative concept at the heart at the latest film from Chilean auteur Pablo Larraín is actually quite a simple one, but this being a film by Pablo Larraín, he skilfully takes this seemingly simple initial premise to some very dark and uncompromising places. In doing this, it means that not only is Ema one of the more unique and memorable films to be released in the last few months, but also gives us a film that is able to examine much more broader and interesting themes than a more conventional film with a similar story may do. It is a film very much unapologetically made on its own terms, but for those willing to go with Larraín’s unconventional and uncompromising approach will be rewarded by not only a film that contains some haunting and memorable individual moments, but also an unforgettable conclusion that does more than justify this narrative approach.

Whether it be a film about a wife of an assassinated US president, or one about paedophile priests or indeed one about referendums involving dictators, Pablo Larraín is not afraid to approach these varying types of story from slightly unconventional angels, and in doing so utilises all the unique variables a director has at their disposal that only a visual medium such as film has to offer. The narrative to Ema takes place very much after the main event has occurred, and of course these things or often very complex, and as the narrative unfolds we are given the required information that provides the necessary context to what happened and why, but only the necessary small amounts so to not detract from what is unfolding at the time.

It is quite clear from the start that both of our main protagonists are troubled, flawed and often quite destructive people, and they are at times difficult to like, but thanks to the performances and Larraín’s skilful direction and visual panache their story is never anything less than compelling, even if it is at times difficult to watch. Because of that simple (and therefore to an extent relatable and engaging) premise at the very heart of the story, we are able to still empathise with the protagonist to a certain extent that allows us to be able to go along with the film’s unique and uncompromising visual style.

It is very much in the visuals that Larraín is able to truly depict the film’s themes and the deep internal struggles and emotions that the protagonist goes through. Ema has three main individual outlets; dance, sex (with either gender and at times with multiple people at the same time) and a flame thrower (I did say that we have to be willing to just go with the film to a certain extent). Why she partakes in these outlets and what they mean are of course very much open to interpretation, but there is always very much a purpose to every action she takes, no matter how seemingly destructive, juvenile, apparently random or morally questionable it is – even if it is setting fire to objects in the street or indulging in alcohol fuelled orgies. Ema always very much remains a personal story and journey (hence the title), but in the narrative developments it also takes on much broader themes about gender roles in society. It never seeks to provide answers, but merely thoughtful discussions, and is ultimately more rewarding for it. 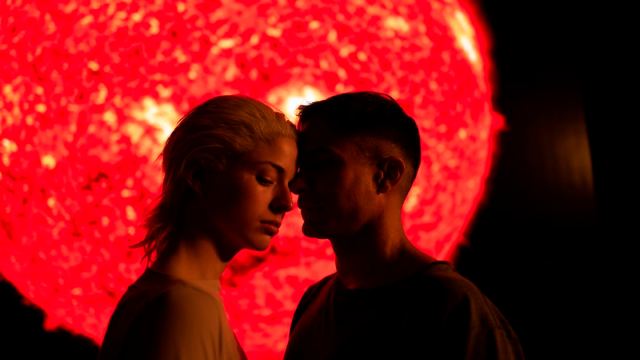 Ema is also very much a film that is a feast for the eyes; Larraín’s eye for visual detail is clear throughout, as every shot, line of dialogue and facial expression is there for a reason and has at least one meaning. Ema is a professional dance teacher, and so dancing plays a huge role in her life, and the film’s many dance scenes are visually stunning and have an intoxicating feel to them that does truly grab the audience’s attention, even if the uncompromising nature of them does make them quite uncomfortable viewing at times. Ema and Gastón often argue about dancing, but it is clear that there is plenty of subtext within these arguments. The stunning visuals are also complimented by an equally brilliant score by Nicolas Jaar.

As the film’s protagonist, Marian Di Girolamo delivers a stunning performance. Appearing in pretty much every scene, we may certainly not always agree with the decisions her character makes or always completely empathise with her, but watching her character deal with her deep internal guilt is never anything less than compelling, and this all comes to a head in the film’s unforgettable, but suitably uncompromising conclusion. Ema is certainly not a film for everyone, and its unique approach and style produces the occasional alienating moments, however those willing to go with this unique narrative and visual approach will be greatly rewarded.

An intoxicating rollercoaster ride of sounds and images; Ema is not a film for everyone but has enough substance at its heart to justify its uncompromising, plentiful and unique style, and is an unforgettable and unique experience.

At time of writing Ema is available to stream on MUBI – go on, give it a go!