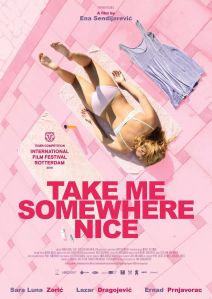 Alma (Zoric), a Dutch teenager of Bosnian descent, returns to her home country to visit her sick father who she has never met. She initially stays with her cousin Emir (Prnjavorac) who she has not seen for 10 years and his ‘intern’ Denis (Dragojevic), and after a few false starts, the three of them embark on a journey across Bosnia with many unexpected twists and turns.

Not the catchiest of titles is it?

However, the enigmatic title just perfectly sums up the slightly off-kilter tone, style and structure of Ena Sendijarevic’s feature length directorial debut that is both quirky and entertaining, but in equal parts also occasionally alienating and infuriating.

Take me Somewhere Nice often feels very cinematic with its long takes of sun-drenched and desolate landscapes that effectively capture the isolation and ‘never been this far from the shire before’ feeling that its main characters experience. It is certainly at its very core a very simple road movie, but its intentionally unconventional structure and style make it more than that, and that ultimately proves to be both to its detriment and enhancement.

We do unfortunately live in an age where films are reluctant to take risks (relatively speaking) and so they end up having very predictable stories where every supposed twist and turn can be signposted. Well, Take me Somewhere Nice can certainly not be accused of such a thing as its unconventional story and characters means that it is impossible to quite know what is going to happen next or what decision its key characters are going to make. This total lack of predictability does certainly make the film engaging and gripping (among other things) in that it makes sure to keep our attention, as we can never quite get on terms with what is going on – in that we may think we have figured out the characters or the film, but then they surprise us by making a completely unexpected and seemingly random decision or going in a completely unexpected direction. Unpredictability is (as previously stated) a good thing, but there has to be justification for actions, and the tendency for the narrative of Take me Somewhere Nice to leave huge gaping gaps between what should be key scenes often makes it is impossible for us to see any kind of reason for a character’s narrative affecting decisions, and this does present a problem.

Sendijarevic’s tendency to give us an extended period of silence from a character before they say something, shown by a long take of the camera being placed above their head at a slightly unusual angle, though initially quirky and amusing, does start to feel repetitive as it starts to feel that she uses it just to fill the time. This very understated way of showing what are (within the context of narrative) sometimes quite dramatic moments does certainly add an element of unnerving dry humour to the story – even if it often produces nervous laughter. These humorous moments, despite their understated and desert-dry presentation, often produce some of the film’s most memorable and humane moments. 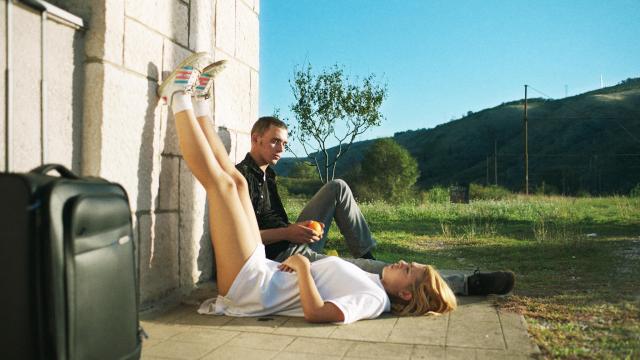 However, the visual style of the film does often feel too intentional and neat, and though the unpredictable nature of the film that keeps us guessing does certainly add intrigue and engagement, the fact we never really quite understand the motivations behind some of the characters seemingly very random, out of character and even immoral actions does create a certain alienating barrier between the audience and the characters, making Take me Somewhere Nice an often frustrating experience. The characters are certainly interesting (and also very well performed by the cast), but the style of the film prevents us from being able to engage with them on as personal level required to make for a truly emotionally engaging or rewarding film.

There is certainly no doubt that Sendijarevic is an auteur that wants to develop her own unique style (well, when I say ‘unique’ there is obvious influence from certain directors) and has a blatant talent and visual eye, but let us all hope that she will deliver more actual substance and consistency (and perhaps even an element of emotional warmth) in her next film to compliment her very singular and unmistakable style.

A film that is equally fascinating and infuriating; Take me Somewhere Nice has a unique style that produces some great moments and an unpredictable narrative that engages and alienates in equal measure. Worth a watch though.

An extremely passionate and (semi) opened minded film reviewer, with a hint of snobbish.
View all posts by MoodyB →
This entry was posted in All Film Reviews, MUBI Releases, World Cinema and tagged entertainment, film, film review, MUBI, world cinema. Bookmark the permalink.