Hunter Frank Walsh (Cage) is expecting a big payday after managing to capture a priceless white jaguar for a zoo. However, onboard the ship transporting Frank and his precious cargo is another predator – a highly trained political assassin (Durand) facing extradition to America. When the prisoner manages to break free, he also let’s free the jaguar, and so Frank must utilize his skills to recapture two very different predators.

Even the most ardent or loyal Nicolas Cage fan will admit that (with the notable exceptions of Mandy and Color out of Space) even by his, err unique standards, his output has been very disappointing in the last few years. The standard of the actual films have of course been generally rather rubbish for a long time, but I think we can all admit that one of the reasons why many us watch a Nicolas Cage film is not for the quality of the overall film (we have already accepted it is highly likely to be absolute crap – and if it is not that is just a pleasant bonus!), but for just how unhinged or slightly crazy Nic’s performance may be, as no one can quite overact in the way Nicolas Cage can! Well, recently he has given quite subdued, almost bored performances (except in the two films previously mentioned). However, I am pleased to say that Primal is a vast improvement as Cage is given a role where has free reign to smoke cigars, wear tight fitting white t-shirts, use all types of random hunting equipment and go a little bit crazy in a role that does hark back to his action roles of the 90s – though it is of course nowhere near as good as his mid-90s ‘golden era’.

As a film, Primal is actually not that bad either, and with the help of some over the top performances it actually serves as a surprisingly enjoyable b-movie for those who just want to relax and switch their brain off for 90 minutes. Now, don’t get me wrong; it is rubbish and is certainly not quite Cage Under Siege, but it is surprisingly watchable rubbish. Ultimately, we all know that action films all have very samey plots anyway, and though Primal inevitably lacks the writing standard or budget to ever be classed as any kind of a ‘good’ or ‘thrilling’ action film, the fact is that a big budget action film starring Denzel, Neeson or Statham could have easily started with the same initial plot.

Most things are of course relative, and perhaps my enjoyment of Primal was down to such low expectations not only because it is a Nicolas Cage film, but also because the directorial debut from former stunt coordinator Nick Powell, 2014’s Outcast (which featured Cage and Hayden Christensen – remember him?) was utterly abysmal. Powell’s directing in Primal isn’t great either, but it is thankfully saved by a script and some game performances that make for a surprisingly watchable and often unintentionally funny viewing experience.

Naturally the plot is full of holes and flaws, with a lot of predictable ‘twists’ and a bunch of characters that are all walking clichés, but there is something almost reassuring in this. Nicolas Cage is of course unashamedly the star of the show, and there is definitely hilarity to be found in the fact that supposedly elite soldiers are taken down in an instant by Kevin Durand’s assassin, but yet Cage’s slightly overweight, cigar chomping and heavy-drinking former soldier with bad fashion sense is much more a match for him – though that was undoubtedly part of Cage’s contract! Cage himself is definitely having a good time (maybe because he is able to reminisce about former glories) and because of this he not only delivers some great lines that would be completely unmemorable if said by any other actor, but Cage’s unique approach adds far more entertainment value to both these various lines (such as moments when he shouts at a parrot), as well as some individual scenes where Cage’s character gets to unleash his ‘special skills’ with booth his fists, a crossbow and various other hunting gear. Cage’s protagonist even gets a character arc – albeit a generic and predictable one. 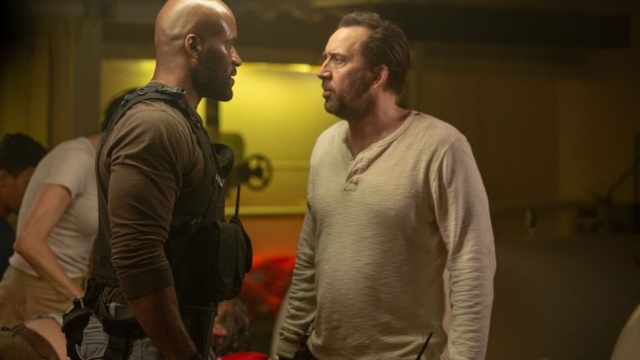 Also upping the entertainment value is Kevin Durand as the assassin on the loose, with a suitably over the top, scenery chewing performance that proves that he is very much aware of exactly what film he is in. Meanwhile Famke Janssen has very little to do other than be a name on the poster, which is just as well as she is unable to actually move any part of her face. The rest of the supporting cast are particularly unmemorable in what are very generic roles, except Michael Imperioli as a shady government agent who is memorable for all of the wrong reasons; he must have forgotten how to act, as his dialogue delivery is so bad that it has to be seen to believed – more charisma and screen presence could be found in a plank of wood! He is certainly out acted by the CGI jaguar, which, along with some of the other animals that Nicolas Cage’s character, do get their own inevitable key moments – though these are kept very limited due to budget restrictions.

As the generic and cliché-ridden plot plods along it reassuringly offers no surprises, but there is fun to be had from it, and though Primal is certainly a film that will disappear from memory once it has finished, for those wanting a very easy 90 minutes – trust me, you could do far worse!

With a crossbow-wielding Nicolas Cage on good form, Primal is pure b-movie escapism. It is undoubtedly rubbish, but is surprisingly enjoyable, switch-your-brain-off rubbish!