Grace (Bening) has her entire world turned upside down when Edward (Nighy), her husband of 29 years, leaves her for another woman. With the help of her visiting son (O’Connor) she attempts to take back control of her life and come to terms with what has happened.

Sometimes a film is written with the very best of intentions, but yet despite all of the elements that should make it work being very much there, it somehow just fails to capitalise on it. Sadly, Hope Gap is one of those films – it contains at its narrative core so many relatable themes that it really should be an inclusive and engaging experience. Though most of us will have some degree of experience of either breakdowns of our own relationships or that of our parents that we can bring to the table, there is often something very exclusive about Hope Gap that means it gets caught up in its own self-indulgence that actually alienates its audience. This is a tremendous shame, as there are so many relatable themes at the core of the narrative to Hope Gap ­– not only the breakdown of a long term relationship, but how a parent’s relationship failings can be somehow replicated in their offspring’s own relationship failings.

Indeed, as Josh O’Connor’s Jamie discusses his own relationship problems with his parents there are very much parallels between him and his father, and having realised that his parents may never have been right for one another it does make him question his own ability to love, and even when his mother discusses the possibility of suicide to him the two have a very dark discussion comparing her unbearable heartbreak to the intolerable suffering of terminal cancer and the fact that in the latter scenario he would encourage her to kill herself if it were to end her suffering – is there any difference to physical and emotional pain? Likewise, any relationship is a compromise on both parties, but there can be (unfortunately) one party that has to compromise so much that they actually subject themselves to what is like a prison sentence of misery, as they basically have to be someone they are not just to please the other. However, I feel that by writing this I am giving the film more credit than it deserves as it contains some potentially very powerful moments, but instead gets lost in its own feelings of self-indulgent melancholy (and obsession with the spectacular cliffs in its location of Seaford in East Sussex) to actually emerge as quite alienating and unsatisfying. 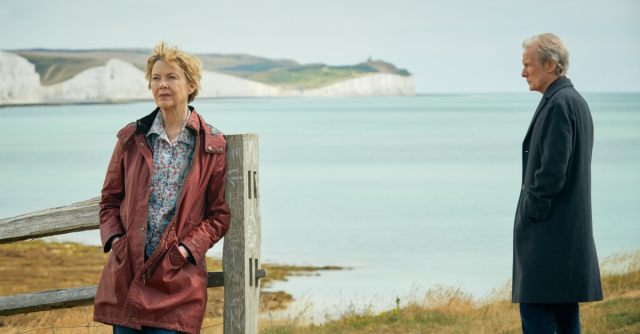 What does not help is Annette Bening’s attempt at an English accent which is sometimes ‘generic English’ and sometimes verges onto scouse. A fine actress as she undoubtedly is, her struggles with the accent are inevitably quite off putting, especially as the story could have been exactly the same with her character just being American. Bening, Bill Nighy and Josh O’Connor are all obviously talented enough to make such a melodrama engaging and their characters relatable, but they are just let down by the self-indulgent script and extremely disjointed narrative that lacks any true focus. There are some moving movements thanks to the performances, but these are few and far between and get lost in the very messy narrative, meanwhile the film is very well made with some great shots of the stunning coastline and an adequate musical score, but it is just not enough to save the film’s severe failings.

This is all such a massive shame, as the actual narrative to Hope Gap does incorporate some relatable themes that hit a nerve with us all in some way – yet the only the only thing we will remember about Hope Gap is that Seaford has some stunning cliffs.

A melodrama about relatable themes that promises so much and should be extremely engaging, but yet somehow Hope Gap emerges as quite the opposite – an alienating and dull film wrapped up in its own self-indulgence – what a waste!