Young mother Laura (Jones)  suspects that her husband (Wayans) may be having an affair, and after confiding in her larger-than-life father (Murray), he manages to persuade her to investigate further, leading to the two of them going on an adventurous fact-finding adventure through New York.

So, you need an actor to play a dry-witted, charismatic elderly male character who seems to have an answer for everything that is usually a pithy anecdote or trailer-friendly one-liner? Who you gonna call? Well, Bill Murray of course!

For her latest film Sofia Coppola seems to complacently think that by casting Bill Murray as an aging lothario that can talk his way out of any situation with his sharp tongue will instantly recreate the magic from Lost in Translation. While I am sure that this reunion will certainly be a selling point for many, but sadly there is in fact very little magic to be found in what is a predominantly ponderous and self-indulgent film that certainly has a potentially good concept at its core, but is sadly very much lacking in substance or a good enough script to either entertain or engage on any decent level.

Everyone involved (including Coppola) seems to be very much in awe of Murray, and though he does get the occasional decent, witty and (and as stated previously) trailer-friendly line of dialogue, he is clearly on autopilot and looks like he doesn’t truly want to be in this film. What also does not help is that his character is not particularly interesting, the fact he is often quite unlikeable is fine (and that is obviously the point), but his character is just often actually just plain irritating and very clichéd. Ideologies can be infectious, and one the most interesting aspects of the plot is how some of Laura’s decisions are influenced by her dad’s theories and ideologies regarding human relationships. The whole concept of how a parent’s inability to be happy or in a long-term relationship then has a similar knock-on effect to their offspring is one of the more interesting aspects of the film, but it not only needs to be developed more, but also with more nuance instead of patronisingly signposting everything – as well being completely lost in the slapdash and inconsistent narrative tone. Whether its speeding around New York in old sports car or instantaneously flying to a very expensive holiday resort in Mexico, On the Rocks often feels like it wants to be an adventurous father-daughter caper movie as the two of them try to pursue Laura’s husband to try and catch him out, but this just feels out of place in a what is a very inconsistent narrative tone – suggesting the film doesn’t really know what it wants to be. The most interesting aspect being that it does feel at times that her father actually wants to discover that Laura’s husband is having an affair, which actually suggests that confirmation of his theories is more important to him than his daughter’s happiness, this is again is an interesting notion, but just lacks any true development.

Rashida Jones’ character of course has the most to lose within the narrative developments, and though she and every other character in the film seems to have infinite wealth and is able to eat at the poshest restaurants, while Jones’ character herself is able to have someone look after her two children at the drop of a hat if the narrative requires it, she is still engaging enough as within the context of her life the stakes are of course extremely high. Jones herself delivers a very good performance, but she is just let down by a script and camera that a primarily focussing on Murray, while at the same time lacking any kind of actual focus, and often to resorting to pointless filler. The development of their relationship starts of interesting, but is extremely unsatisfying and predictable.

Character-driven narratives and how these lead to often seemingly quite random plot developments and individual moments can of course work very well if we can really engage with the characters and want to spend time with them, but for me this is just not the case in On the Rocks. Though it certainly has some good individual moments, despite being only 96 minutes On the Rocks is at times a genuinely laborious slog to watch, with the disjointed narrative often including scenes that add nothing to either the overall story or the character’s individual journeys. It does seem that Coppola watched a lot of Woody Allen films before making On the Rocks as it not only contains the trademark bittersweet tones of a Woody Allen film, but also feels like a love letter to New York. Sadly, though the plethora of scenes that seem to be predominantly about New York add nothing to the film and do feel incredibly self-indulgent, and this is certainly not helped by the quite alienating jazzy score by Phoenix. 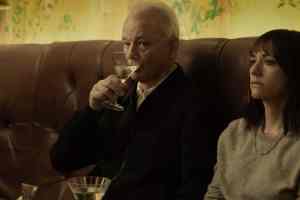 In all of her awe for the film’s main actor and the city it is set in, Coppola forgets to truly develop any of the film’s potentially interesting and pertinent themes; instead everything is patronisingly overstated to the point that it insults the audience’s intelligence. Throughout the film we get scenes of which Laura has (very one sided) conversations with another parent (played by Jenny Slate) who talks vacuous nonsense about a ‘relationship’ she has, and this of course develops in a very predictable way over the course of narrative. While this is initially amusing, it just becomes annoying along with so much of the film’s lazy way of dealing with its core themes.

As the story reaches its conclusion there are very little surprises (which is perhaps partly the point), but how it gets there becomes increasingly unbelievable and leads to a genuinely unsatisfying and underwhelming conclusion, which inevitably has to be regarded as a complete waste of not only a good concept that has some potentially engaging themes, but also some great acting talent.

Despite an initially interesting concept, though On the Rocks has some good and amusing individual moments (most of which are in the trailer), its lack of narrative focus means that it inevitably develops into a self-indulgent, alienating and ultimately unsatisfying film – what a waste!