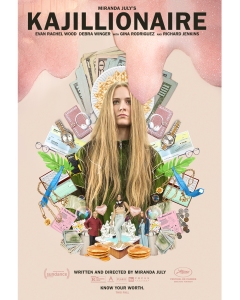 Two con artists (Winger and Richard Jenkins) have been training their 26-year-old daughter Old Dolio (Wood) how to swindle, scam and steal all her life. However, during a desperate and hastily conceived heist, they charm a stranger (Rodriguez) into joining them, only to have their entire world turned upside down.

Films involving heists and untrustworthy characters constantly screwing each other over are of course nothing new, but in Kajillionaire Miranda July successfully does something different with a very familiar concept and genre. Though the film is certainly put together with an element of quirky dry humour, there is underlying sense of melancholy and very human feelings lying beneath its unconventional narrative that helps to keep it all together and make it intriguing from start to finish, especially as we can never be sure who is actually conning who.

To drive its narrative Kajillionaire includes the traditional narrative trope of adding a new character (Gina Rodriguez’s Melanie) to what is a seemingly very settled and established group who all know their exact roles, and not only the inevitable friction this causes, but also the fact that we are not sure if this new character is doing the conning or being conned. Miranda July handles this all very well and the added element of the daughter finally wanting something more ‘conventional’ from her relationship with her parents adds an extra bit of emotional heft. It is the character journey of Old Dolio that not only forms the emotional backbone of the narrative, but also serves to make the narrative more intriguing.

As Old Dolio Evan Rachel Wood delivers an incredible and quite physical performance, through both her facial expressions and body movements she captures perfectly the naivety and social awkwardness of her character, and it is the introduction of Melanie that leads her to question everything about her life and the way her parents have treated her. Her character arc provides essential substance and emotional engagement to a film that is otherwise almost slightly too quirky and unusual for its own good; while it is always refreshing to see a filmmaker make a film very much in its own unique way, some of the slightly quirky moments are genuinely funny, but some other individual scenes just feel like they are weird merely for the sake of it and do not really work, and they only actually detract from the main elements of the film.

The visual style of the film is also intentionally unusual, often with long takes that follow the characters, while Sebastian Wintero’s sun-drenched cinematography capture perfectly the openness and isolation of the city the film is set in, while Emile Mosseri’s score (that features a haunting and almost Twin Peaks-esque version of Mr Lonely) adds to the underlying emotional melancholy of the overall narrative.

As Kajillionaire enters its final third it is certainly not without its rather unusual moments (such as a moment where after a mild earthquake Old Dolio thinks she is initially dead) and the moments of off-beat humour do sometimes feel out of place, but the fact that we can never be sure who is actually conning who and other certain narrative elements (that describing would involving spoilers) make for a genuinely satisfying conclusion to what is certainly one of the more unique films of 2020.

Though the fact it is often weird just for the sake of being weird is sometimes to its detriment, overall Kajillionaire is a very well-acted and made film with plenty of tricks up its sleeve that makes sure that it is surprisingly emotional and one of the more unique films of 2020

This hobby blog is dedicated to movie nerdom, nostalgia, and the occasional escape. In the late 90s, I worked at Blockbuster Video, where they let me take home two free movies a day. I caught up on the classics and wrote movie reviews for Denver 'burbs newspapers and magazines. Currently, I am enjoying my new life as a new dad, but when there's free time, movies are standard. Comments and dialogue are always encouraged. Happy Moviegoing!