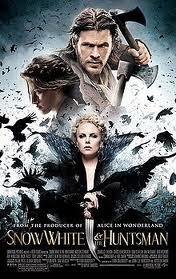 Oh good, another retelling of the story of Snow White story, this time for the Twilight generation. In this version, the evil and evidently feminist queen Ravenna (Theron) takes over the reign of some random kingdom in some random fantasy world, killing the king after they have married and banishing his daughter Snow White (Stewart obviously) to a life in a prison cell. As Snow White reaches adulthood, Ravenna is informed by a 3D version of the talking mirror that it is Snow White as the most fairest in the land that is causing her to age, and to keep her immortality she must kill Snow White. Naturally, Snow White escapes and Ravenna sends a drunken and extremely moody (Scottish) huntsman (Hemsworth) to retrieve her and in return Ravenna will bring his wife back from the dead. After realising Ravenna will not keep her part of the deal, the huntsman reluctantly becomes the protector of Snow White. They join forces with eight dwarves (!), and the people of a small village to defeat Ravenna’s evil CGI army and Snow White must kill Ravenna (as she is the only one that can do it) to restore harmony to the kingdom.

In my view this was never going to be a masterpiece so I had low expectations but thought I would give it a go. Well, it has to be said that the plot is of course a little predictable, ticking off all the clichés as it plods along. The acting and clunky dialogue would not look out of place at a Christmas panto, except Stewart who is as comatose as ever. This film is also surprisingly slow, which unfortunately only leaves the stiffness of the dialogue even more exposed.

However, despite all these (expected) flaws, Snow White and the Huntsman is an enjoyable enough romp. First time feature director Rupert Sanders certainly gives the film visual flair with some very striking set pieces and beautiful but deadly scenery. The gritty and darker tone of this film means it is not suitable for young children, but it works extremely well. Though the likes of Theron and Hemsworth do ham it up to the max, this actually compliments the film extremely well making their characters extremely watchable, though I am not sure why all the male characters have to be Scottish. For me, one of the best moves was the casting of the dwarves, all played by well known talented British actors such as Ray Winstone, Ian McShane, Toby Jones, Nick Frost, Bob Hoskins. To fit in with the tone of the film they all have Lord of the Rings type names and are actually warriors, but they add good humour and heart, and are a good antidote to Hemsworth’s brooding and Stewart’s gormlessness making the whole story so much more enjoyable.

Once we arrive to the final inevitable battle, this does not disappoint. Though Snow White’s dramatic change into a warrior woman is a little unbelievable and an apparently ‘rousing’ speech she gives to persuade the villagers to fight for her is extremely embarrassing both in dialogue and delivery. Once the action takes over it is very thrilling and extremely well put together.

Though no masterpiece, and riddled with flaws, Snow White and the Huntsman is an extremely watchable and enjoyable romp. The striking visuals and some great individual performances easily making up for the clichés and clunky dialogue and plotting, making this two hours worth investing in.

An extremely passionate and (semi) opened minded film reviewer, with a hint of snobbish.
View all posts by MoodyB →
This entry was posted in All Film Reviews and tagged charlize theron, entertainment, film, hollywood, kristen stewart, twilight. Bookmark the permalink.